KidzSearch Safe Wikipedia for Kids.
Jump to: navigation, search
This page is about the U.S. state, but you may be searching for New York City. For other meanings, see New York (disambiguation).

New York, officially the State of New York, is a state of the United States and was one of the original Thirteen Colonies, which were the first thirteen states to make up the US. New York is in the northeastern United States, bordered by Lake Ontario and Canada on the north, Lake Erie and Canada on the west, Pennsylvania on the west and south, Vermont, Massachusetts, and Connecticut on the east, and New Jersey on the south in the eastern parts of the state.

New York was originally New Netherland, started by the Dutch Empire in the early 17th century. Late in the century, it surrendered to an English fleet during the Anglo-Dutch Wars and became part of the British Empire. About half the Dutch colony was given to neighboring English colonies. The Battle of Long Island, Battle of Saratoga, and other important battles of the American Revolution were fought in New York and it joined the new United States. The slave trade brought many black people into the state, where they were forced to work for white colonists.

The United States Census Bureau says that, as of 2005, New York had the fourth most people (population) in the United States, after California, Texas, and Florida. New York's estimated population is 19,297,729.[8]

Many famous people were born in New York, including politicians, scientists, soldiers, artists, writers, entertainers, and others. 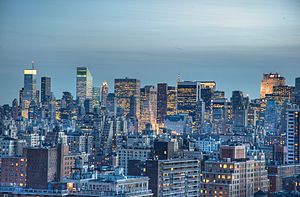 The biggest city in New York is also called New York, located in the south-eastern part of the state and built on the Hudson River; it is by far the biggest city in the U.S.. Part of New York City is on Long Island, a large island in the Atlantic Ocean, and another part of it is on Staten Island, which is to the southwest of Manhattan, the central business district. Most people living in New York state live in the New York metropolitan area, one of the world's biggest metropolitan areas, which also includes part of eastern New Jersey.

The larger part of New York, north and northwest of the metropolitan area, is called "Upstate New York". Cities in this part of New York include Buffalo, the state's second largest city, Rochester, Syracuse, and the state capital of Albany. These places became cities because of the Erie Canal. Between 1788 and 1797, the Legislature moved the state capital around between Albany, Kingston, Poughkeepsie, and New York City. Albany became the permanent capital from 1797.[9]