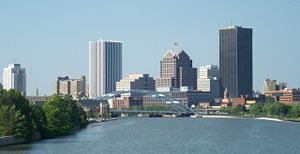 Some of the buildings in Rochester.

Rochester is the third-largest city in the U.S. state of New York. It has a little over 200,000 people living in it and over a million people living in the metropolitan area. It is on the southern shore of Lake Ontario. It is between the cities of Buffalo and Syracuse.

Rochester is on the shore of Lake Ontario, one of the Great Lakes. Also, the Genesee River flows through it. In the area near Rochester, there are many streams, large hills called drumlins, and lakes, such as the Finger Lakes. The weather in Rochester is warm in the summer and cold in the winter, with a lot of snow falling in the winter and early spring.

Rochester is the headquarters of Eastman Kodak, a company that makes cameras and camera film. Rochester is also the home to universities such as the University of Rochester and the Rochester Institute of Technology.