The flag of Buffalo, New York 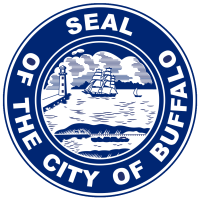 The seal of Buffalo, New York

Buffalo is a city in the U.S. state of New York. Buffalo is the second-biggest city in New York State.

Buffalo is on the eastern side of Lake Erie near the Niagara River. It is close to Niagara Falls, and to Canada.