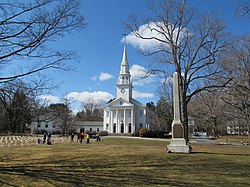 Connecticut is a state in the United States. Its capital is Hartford, and its largest city is Bridgeport.

The highest peak in Connecticut is Bear Mountain in Salisbury in the northwest corner of the state. The highest point is just east of where Connecticut, Massachusetts, and New York meet (42° 3' N; 73° 29' W), on the southern slope of Mount Frissell, whose peak lies nearby in Massachusetts.

The Connecticut River cuts through the center of the state, flowing into Long Island Sound, Connecticut's outlet to the Atlantic Ocean. Further information: List of Connecticut rivers

The state, although small, has regional variations in its landscape and culture from the wealthy estates of Fairfield County's "Gold Coast" to the rolling mountains and horse-farms of the Litchfield Hills of northwestern Connecticut. Connecticut's rural areas and small towns in the northeast and northwest corners of the state contrast sharply with its industrial cities, located along the coastal highways from the New York border to New Haven, then northwards to Hartford, as well as further up the coast near New London. Many towns center around a small park, known as a "green," (such as the New Haven Green). Near the green may stand a small white church, a town meeting hall, a tavern, and several colonial houses. Forests, rivers, lakes, waterfalls and a sandy shore add to the state's beauty.

The northern boundary of the state with Massachusetts is marked by the distinctive Southwick Jog/Granby Notch, an approximately 2.5 mile (4.0 km) square detour into Connecticut slightly west of the center of the border. Somewhat surprisingly, the origin of this anomaly is uncertain, with stories ranging from surveyors who were drunk, attempting to avoid hostile Native Americans, or taking a shortcut up the Connecticut River; Massachusetts residents attempting to avoid Massachusetts' high taxes for the low taxes of Connecticut; Massachusetts' interest in the resources represented by the Congamond Lakes which lie on the border of the jog; and the need to compensate Massachusetts for an amount of land given to Connecticut due to inaccurate survey work. Perhaps the only suggested reason which can be safely ruled out is that the jog is necessary to prevent Massachusetts from sliding out into the Atlantic Ocean! In any event, the dispute over the border retarded the development of the region, since neither state would invest in even such basic amenities as schools for the area until the dispute had been settled.

The southwestern border of Connecticut, where it abuts New York State, is marked by a panhandle in Fairfield County, containing Greenwich, Stamford, Fairfield, Westport, Wilton, and Darien, housing some of the wealthiest residents in the world. This irregularity in the boundary is the result of territorial disputes in the late 1600s, culminating with New York giving up its claim to this area, whose residents considered themselves part of Connecticut, in exchange for an equivalent area extending northwards from Ridgefield, Connecticut to the Massachusetts border as well as undisputed claim to Rye, New York.

Cities and towns in Connecticut

The name "Connecticut" comes from the Mohegan Indian word "Quinnehtukqut". It means "Long River Place" or "Beside the Long Tidal River." The first explorer from Europe to come to Connecticut was Adriaen Block, from the Netherlands. After he explored this region in 1614, Dutch fur traders sailed up the Connecticut River (Named Versche Rivier by the Dutch) and built a fort near present-day Hartford, which they called "House of Hope" (Dutch: Huys de Hoop).

The first English settlers came in 1633. They were Puritans from Massachusetts, who were led by the Reverend Thomas Hooker. They founded the Connecticut Colony. Colonies were also established at Old Saybrook and New Haven, which later became part of Connecticut. Historically important colonial settlements included: Windsor (1633), Wethersfield (1634), Saybrook (1635), Hartford (1636), New Haven (1638), and New London (1646).

The western boundaries of Connecticut have been subject to change over time. According to a 1650 agreement with the Dutch, the western boundary of Connecticut ran north from the west side of Greenwich Bay "provided the said line come not within 10 miles [16 km] of Hudson River." On the other hand, Connecticut's original Charter in 1662 granted it all the land to the "South Sea," i.e. the Pacific Ocean. This probably added confusion to the early forefathers because the Pacific Ocean is located on the west coast of the United States. Agreements with New York, the "Pennamite Wars" with Pennsylvania over Westmoreland County, followed by Congressional intervention, and the relinquishment and sale of the Western Reserve lands brought the state to its present boundaries.