Hartford is the capital city of the U.S. state of Connecticut. It is on the Connecticut River and only 24 miles from Springfield, Massachusetts. Hartford has the third most people in the state behind Bridgeport and New Haven. It is an important center of Insurance. Airline service is provided from Bradley International Airport.

The first Europeans known to have explored the area were the Dutch. They were led by Adriaen Block. They sailed up the Connecticut River in 1614. Dutch fur traders from New Amsterdam came back in 1623. They wanted to build a trading post and fortify the area for the Dutch West India Company. The first place was on the south bank of the Park River. This would have been in the present-day Sheldon/Charter Oak neighborhood. This fort was called Fort Hoop or the "House of Hope." In 1633, Jacob Van Curler bought the land around Fort Hoop from the Pequot chief. He paid only a small price. A few families and a few dozen soldiers lived there at that time. Everyone left the fort by 1654. The area is known today as Dutch Point; the name of the Dutch fort "House of Hope" is reflected in the name of Huyshope Avenue.[1][2]

The English started to come in 1636. They settled upstream from Fort Hoop near the present-day Downtown and Sheldon/Charter Oak neighborhoods.[3] 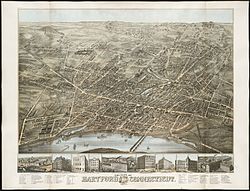 Throughout the 19th century, Hartford's number of people, economic productivity, cultural influence, and political power continued to grow. The Industrial Revolution in Hartford in the mid-1800s made it one of the wealthiest per capita in United States.[4]

On December 15, 1814, people from the five New England states (Maine was still part of Massachusetts at that time) came together at the Hartford Convention. Unhappy about the War of 1812, they discussed New England possibly breaking away from the United States.[5]

During the early 19th century, the Hartford area was an important place for abolitionist activity. The most famous abolitionist family was the Beechers. The Reverend Lyman Beecher was an important Congregational minister known for his anti-slavery sermons.[6][7] His daughter, Harriet Beecher Stowe, wrote Uncle Tom's Cabin; her brother Henry Ward Beecher was a well-known clergyman who strongly hated slavery. He also supported the temperance movement and women's suffrage.[8][9] The Stowes' sister Isabella Beecher Hooker was a leading member of the women's rights movement.[10] 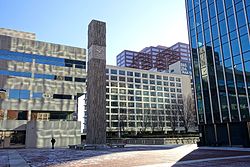 On July 6, 1944, one of the worst fire disasters in the history of the United States happened in Hartford. It happened at a performance of the Ringling Brothers and Barnum and Bailey Circus. It became known as the Hartford Circus Fire.[12]

After World War II, many people from Puerto Rico moved to Hartford.[13]

Riverfront Plaza was opened in 1999. This connected the riverfront and the downtown area for the first time since the 1960s.[14]

In July 2017, Hartford thought about filing Chapter 9 bankruptcy. However, a state bailout later that year stopped the city from filing the form.[15][16][17] 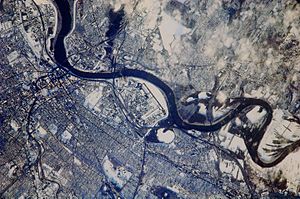 Photograph of Hartford taken from the International Space Station (ISS)

Hartford is in the humid continental climate zone (Köppen Dfa). This means it has hot, humid summers and cold winters.[20]

Map of racial distribution in Hartford, 2010 U.S. Census. Each dot is 25 people: White, Black, Asian, Hispanic or other (yellow)

Hartford has a strong mayor-council government. In 2003, Hartford voted to have a mayor-council system. They had a council-manager form for more than 50 years. Mayor Eddie Perez was first elected in 2001. He was re-elected with 76% of the vote in 2003. He was the first strong mayor elected under the new government system. He is credited with lowering crime, reforming the school system, and helping the economy in the city. However, his reputation was hurt by accusations of corruption.[27] The current mayor is Luke Bronin.

Connecticut cities provide almost all local services such as fire and rescue, education, and snow removal. This is because county government no longer exists in Connecticut since 1960.[28]

The Hartford Fire Department provides all fire protection in Hartford. They have 12 fire stations in the Hartford. It is the fifth-biggest fire department in Connecticut. They also have a fire apparatus fleet.[34][35]

The Hartford Police Department was created in 1860. Although, law enforcement in Hartford started in 1636.[36] It is at 253 High Street.It includes divisions such as animal control, bomb squad, and detective bureau.

Hartford is an important place for medical care, research, and education. In Hartford itself, the city has Hartford Hospital, The Institute of Living, Connecticut Children's Medical Center, and Saint Francis Hospital & Medical Center (which merged in 1990 with Mount Sinai Hospital).[38]

The daily Hartford Courant newspaper is the United States's oldest continuously published newspaper. It was created in 1764. A weekly newspaper called the Hartford Advocate also serves Hartford and the surrounding area. Other newspapers include the Hartford Business Journal ("Greater Hartford's Business Weekly") and the weekly Hartford News.[41]

The Hartford/New Haven television market is the 29th biggest media market in the U.S.[46]

Hartford has many famous institutions such as Trinity College.[47] 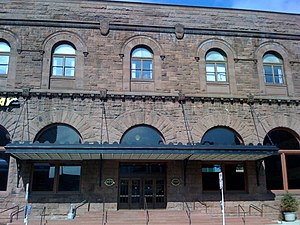 Amtrak provides service from Hartford to Vermont via Springfield and southward to New Haven. The station also has many bus companies.[52]

Connecticut Transit (CTtransit) is owned by the Connecticut Department of Transportation. The Hartford Division of CTtransit runs the local bus service in the city and the surrounding area. Hartford's Downtown Area Shuttle (DASH) bus route is a free downtown circulator. All city buses have bike racks.[57]

There are bicycle lanes on many roads including Capitol Avenue, Zion Street, Scarborough Lane, Whitney, and South Whitney.[58]

The first American cookbook was American Cookery, The Art of Dressing Viands, Fish, Poultry, and Vegetables by Amelia Simons, was published in Hartford by Hudson & Goodwin in 1796. It was also the first cookbook to have recipes for squash and cornmeal. It also had the first published recipe for pumpkin pie. It influenced a generation of American baking with a recipe for leavening bread with pearl ash.[59] The full text of the book is available online.[60]

Hartford got praise from Food and Wine as "a foodie destination".[61][62]

Hartford has many seasonal farmers' markets.[63][64] The Hartford Regional Market is the biggest market between New York City and Boston.[65]

The Hartford Wolf Pack of the American Hockey League plays ice hockey at the XL Center in downtown Hartford.[66]

Hartford has many sister cities.[75] They include: