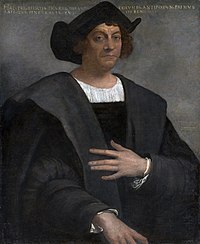 Christopher Columbus was the first European to visit Puerto Rico

Puerto Rico has almost 4 million (4,000,000) people. Its political system is based on a republican system. It has two official languages: Spanish and English. The currency used is the United States dollar. Puerto Rico means "rich port" in Spanish.

The Commonwealth of Puerto Rico includes the largest, main island and a number of smaller islands, including Mona, Vieques, and Culebra. Of those three smaller islands, only Culebra and Vieques are populated all year. Mona is unpopulated, but employees of the Puerto Rico Department of Natural Resources sometimes visit the island to inspect it and its wildlife. People can visit the island for hiking and camping by getting the permission needed. San Juan, on the northern side of the main island, is the island's largest city and the capital of the territory. The common languages are Spanish spoken by 94.7% of the population and English, spoken by 5.3%.

On May 3, 2017, Puerto Rico filed for bankruptcy after a massive debt and weak economy.[9] It is the largest bankruptcy case in American history.[9]

Status with respect to the USA

Puerto Rico is one of the unincorporated territories of the USA. Because it is not a state, citizens cannot vote in U.S. national elections unless they have an address in one of the 50 US states. These are organized, self-governing territories with locally elected governors and legislatures. Puerto Rico elects a Resident Commissioner to the U.S. House of Representatives.[10]

The history of Puerto Rico began when the Ortoiroid people started living in the island between 3000 and 2000 BC. Other tribes, for example the Saladoid and Arawak Indians, lived in the island between 430 BC and 1000 AD. When Christopher Columbus arrived at the island in 1492 and named it San Juan Bautista,[11] the people living there were the Taínos.[12][13]

Since it is in the northeastern Caribbean Sea, Puerto Rico formed an important part of the Spanish Empire from the early years of the exploration, conquest, and colonization of the New World. The Spanish spread race-based slavery across the island. In the 19th century, slave revolts and the abolitionist movement brought an end to legal slavery.[14]

The island was a major military post during many wars between Spain and other European countries for control of the region in the 16th, 17th and 18th centuries. In 1898, during the Spanish-American war, Puerto Rico was invaded and became a possession of the United States.

During the 20th century, Puerto Rico's political status changed from time to time. The Foraker Act of 1900 created a civil government to replace the military government made after the Spanish–American war, and the Jones Act of 1917 gave Puerto Rican people United States citizenship. Afterwards, in 1952, the drafting of Puerto Rico's own Constitution and democratic elections were established.

The issue of the political status of the island (meaning whether it's a country, a U.S state, or a colony) is an issue of debate amongst the Puerto Rican people. In the past there have been many attempts to clearly define the island's political status by means of voting. Most of the time the majority of the people have chosen to remain a colony. However, in the last "status voting" the colonial option appeared to have lost well over 90% of its support, while the U.S state option has only gained strength in the last few decades. The Puerto Rican Independence party, on the other hand, has mainly lost a great deal of support within the last six decades.

Puerto Rico is said to comprise a White majority, an extinct Amerindian population, persons of mixed ancestry, Africans and a small Asian minority. Recent genetic research, however, contradicts that information. According to the 2010 US Census, 99% of the population consider themselves of Puerto Rican descent (regardless of race or skin color), making Puerto Rico one of the most culturally unified societies in the world.

Puerto Rico has a strong literary tradition. The most important playwrights are René Marqués (author of "The Oxcart") and Lin Manuel Miranda (creator of the Broadway musical "Hamilton"). The most famous poets are Julia de Burgos ("Yo fui mi ruta")[15] and Giannina Braschi[16] (author the poetry epic "Empire of Dreams"). Celebrated Puerto Rican novelists include Rosario Ferre (Eccentric Neighborhoods), Giannina Braschi (United States of Banana), and Esmeralda Santiago (When I Was Puerto Rican).[17] Puerto Rican poets who live in New York are called Nuyorican poets.