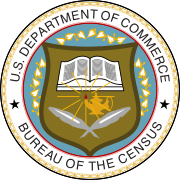 The United States Census is a census done in the United States every ten years. It is required by the United States Constitution which calls for a decennial census done in years ending in "0" since 1790.[1] It is actually two census counts taken concurrently (at the same time).[2] The first is the census of the population, taken from 1790 to the present.[2] The second is the census of housing, which counts the number of residential housing units, and was taken from 1940 to the present.[2] Among other uses, the count is used to determine how many places in the House of Representatives each state has. It also determines how much government money is spent in different locations.