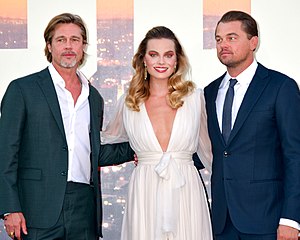 How One Becomes a Celebrity

A "Television personality" is a person who is well known for being on television. These people are often hosts or guests on television programs such as talk shows or discussion programs. These people can be experts on a subject, comedians adding a comedic point of view to the subject or anyone else the producers of the program think would make the program better or more entertaining for the audience.

These people often have some level of celebrity status because of their main profession but some are just famous because they were on television.

Individuals can achieve celebrity, but there are also many celebrity families, such as various royal families (often interest in these will be highest when scandal is involved, as with the House of Windsor) and artistic 'dynasties' e.g. the Barrymore, Cassidy (David and Shaun Cassidy), the Rockefellers, the Osmonds, Osbournes, the Kardashians (Kim Kardashian), Jackson, the Trump (Donald Trump, Fred Trump) and Baldwin families. Celebrity families can also include political families such as the Kennedys, the Roosevelts, and the Reagans.

A recent phenomenon has occurred wherein intricate marketing plans are developed in order to lure adolescents into purchasing celebrity related goods. Some have argued that the idea of celebrity is self-reinforcing and becoming empty: some celebrities are not famous for their actions, but simply famous for their fame and money. For example, Paris Hilton would not be a public figure without her money, but her family's importance has created and helps her be well known and a celebrity. Hilton is a special celebrity; a part of her fame is for doing bad things other celebrities do. People call people like Paris "famous for being famous." Some believe she is doing it on purpose, but in many ways, people like Hilton and other 21st century celebrities are just doing what other celebrities did before.