Donald John Trump (born June 14, 1946) is an American businessman. He is the 45th and current President of the United States. Trump was the chairman and president of The Trump Organization. Much of his money was made in real estate in New York City, Las Vegas, and Atlantic City.[1] He used to own the Miss Universe pageant.[2] He was the star in his own reality show The Apprentice.[3]

In June 2015, Trump announced that he would run for President of the United States in the 2016 presidential elections. Starting mid-July, polls showed that Trump was the front-runner in the Republican field. This was true even after much criticism from the party due to his comments on illegal immigration, Muslims, and ISIS. His campaign has gained support from mostly middle class families. It has gained opposition from Democrats, some Republicans, business people, some world leaders and the Pope.[4]

On May 4, 2016, Trump became the presumptive nominee after his only remaining challengers, Texas United States senator Ted Cruz and Ohio Governor John Kasich, dropped out.[5][6] He became the president-elect on November 9, 2016, after a close race with former Secretary of State Hillary Clinton. Each of them needed 270 electoral votes to win.[7] Trump earned 304, but Clinton had 227.[8] He was inaugurated the 45th president on January 20, 2017. At 70 years old, Trump is the oldest person ever to become President of the United States.

Trump was born Donald John Trump in Queens, New York City. He is the son of Fred Trump and his wife, Mary Anne (née MacLeod), who married in 1936. His mother was born on the Isle of Lewis, off the west coast of Scotland.[9] Donald was one of five children. Donald's oldest brother, Fred Jr., died in 1981 at the age of 43.[10] Trump's sister, is Maryanne, is a judge in New York. Trump's father's parents were German immigrants.[11]

His grandfather, Frederick Trump, immigrated to the United States in 1885. He became a naturalized American citizen in 1892. Frederick married Elisabeth Christ (October 10, 1880 – June 6, 1966)[12] at Kallstadt, Kingdom of Bavaria, Germany, on August 26, 1902. They had three children. He studied at Fordham University until transferring to the University of Pennsylvania.

Trump was not drafted during the Vietnam War.[13] In an interview for a 2015 biography, he attributed his medical deferment to heel spurs.

Trump began his career at his father's real estate company,[14] Elizabeth Trump and Son.[15] the company focused on middle-class rental housing in Brooklyn, Queens, and Staten Island. One of Trump's first projects, while he was still in college, was the revitalization of the foreclosed Swifton Village apartment complex in Cincinnati, Ohio. His father had purchased it for $5.7 million in 1962. Trump became closely involved in the project. With a $500,000 investment, he turned the 1200-unit complex with a 66 percent vacancy rate to 100 percent occupancy within two years. In 1972, the Trump Organization sold Swifton Village for $6.75 million.[16] 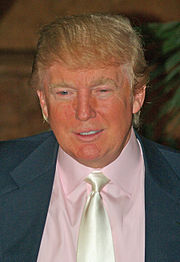 Trump is a WWE (World Wrestling Entertainment) fan, and a friend of WWE owner Vince McMahon. In 1988–89 he hosted WrestleMania IV and V at Boardwalk Hall (dubbed "Trump Plaza" for storyline purposes) and has been an active participant in several of the shows.[21] Trump was inducted into the celebrity wing of the WWE Hall of Fame in 2013 at Madison Square Garden for his contributions to the promotion. He made his sixth WrestleMania appearance the next night.[22]

In 2003, Trump became the executive producer and host of the NBC reality show The Apprentice, in which a group of competitors battled for a high-level management job in one of Trump's commercial enterprises. In 2004, Trump filed a trademark application for the catchphrase "You're fired!"[23]

On February 16, 2015, NBC announced that they would be renewing The Apprentice for a 15th season.[25] On February 27, Trump stated that he was "not ready" to sign on for another season because of the possibility of a presidential run.[26] On June 29, after widespread negative reaction stemming from Trump's campaign announcement speech, NBC released a statement saying, "Due to the recent derogatory statements by Donald Trump regarding immigrants, NBCUniversal is ending its business relationship with Mr. Trump."[27] Trump was replaced by former Governor of California and actor Arnold Schwarzenegger. 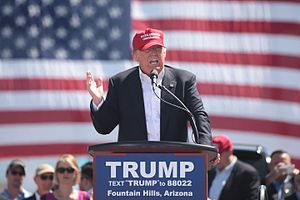 Trump made a formal announcement of his candidacy for president of the United States for the 2016 elections on June 16, 2015. He made the announcement at 11am EST from his headquarters in Trump Tower in New York City.[28][29] Trump launched his campaign saying, "We are going to make our Country Great Again" with a commitment to become the "greatest jobs president."[29] Trump's official campaign slogan is "Make America Great Again." That was Ronald Reagan's campaign slogan, but Trump trademarked it.[30]

On May 4, 2016, Trump became the presumptive nominee after his only challengers, Texas United States senator Ted Cruz and Governor of Ohio John Kasich, dropped out.

Trump has described his political leanings and positions in many ways over time.[32][33][34] Politico has called his positions as "eclectic, improvisational and often contradictory".[34] He has listed several different party affiliations over the years,[34][35] and has also run as a Reform Party candidate.[35] The positions that he has revised or reversed include stances on progressive taxation, abortion, and government involvement in health care.[34]

He has supported Christian groups in the U.S., claiming that he will reverse unfavorable tax treatments preventing them from expressing themselves in the political arena and promising to revive a more widespread use of the phrase "Merry Christmas" instead of "Happy Holidays" in department stores. Other issues he highlights include taking care of military veterans, making the military "strong", aggressive bombing of the Mideast terrorist group ISIS, surveillance of certain mosques in the U.S., and making trade agreements more favorable to American workers.[36][37][38]

During the primaries, Trump (dark blue), has won 40 contests

Trump entered a large field of candidates consisting of 16 other Republican candidates campaigning for the nomination, the largest presidential field in American history.[39] By early 2016, the race had mostly centered on Donald Trump and U.S. Senator Ted Cruz.[40] On Super Tuesday, Trump won the majority of the delegates and remained the front-runner throughout the primaries.

Finishing in June 2016 with nearly 14 million votes, Trump broke the all-time record for winning the most primary votes in the history of the Republican Party.[44] 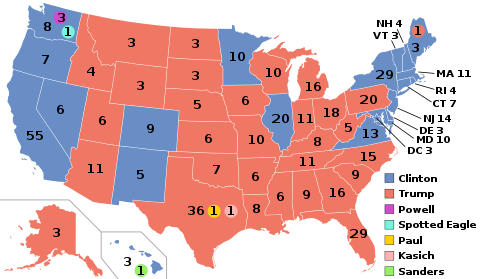 Trump became the first Republican since Ronald Reagan in the 1980s to win the states of Pennsylvania, Michigan, and Wisconsin

After becoming the presumptive Republican nominee, Trump's focus shifted to the general election, urging remaining primary voters to "save [their] vote for the general election."[45] Trump began targeting Hillary Clinton, who became the presumptive Democratic nominee on June 6, 2016, and continued to campaign across the country. Clinton had established a significant lead in national polls over Trump throughout most of 2016. In early July, Clinton's lead narrowed in national polling averages following the FBI's conclusion of its investigation into her ongoing email controversy.[46]

On November 8, 2016, Trump won the presidency with 304 electoral votes to Clinton's 227 votes. Trump won a smaller share of the popular vote than Clinton.[49] He is the fifth person to become president without winning the popular vote.[49][50] The final popular vote difference between Clinton and Trump is that Clinton finished ahead by 2.86 million or 2.1 percentage points, 48.04% to 45.95%, with neither candidate reaching a majority.[51] Trump's victory was considered a big political upset, as nearly all national polls at the time showed Hillary Clinton with a modest lead over Trump, and state polls showed her with a modest lead to win the Electoral College.[52] In the early hours of November 9, 2016, Trump received a phone call in which Clinton conceded the presidency to him. Trump then delivered his victory speech before hundreds of supporters in the Hilton Hotel in New York City.[53]

Trump's transition team was led by Chris Christie until November 11, 2016, when Vice President-elect Mike Pence took over.[54] His nominees for cabinet and other positions include:

Rex Tillerson was nominated to be Secretary of State[56]

On January 20, 2017, Trump was sworn in by Chief Justice John G. Roberts as President of the United States at his inauguration ceremony at the United States Capitol Building. Within his first hour as president, he signed several executive orders, including an order to minimize "the economic burden" of the Affordable Care Act, also known as Obamacare.[81][82]

On the Saturday following Trump's inauguration there were massive demonstrations protesting Trump in the United States and worldwide, including the 2017 Women's March.

On January 23, 2017 Trump signed the executive order withdrawing the United States[83][84] from the Trans-Pacific Partnership (TPP) or Trans Pacific Partnership Agreement (TPPA), a trade agreement between the United States and eleven Pacific Rim nations—Australia, Brunei, Canada, Chile, Japan, Malaysia, Mexico, New Zealand, Peru, Singapore, and Vietnam that would have created a "free-trade zone for about 40 percent of the world's economy."[85] Two days later, he ordered the construction of the Mexico border wall. He reopened the Keystone XL and Dakota Access pipeline construction projects.[86]

File:White House Photo of the Day 2017-03-22.jpg
President Trump receiving a flight jacket from NASA at the White House, March 2017

On January 27, an order suspended admission of refugees for 120 days and denied entry to citizens of Iraq, Iran, Libya, Somalia, Sudan, Syria and Yemen for 90 days, citing security concerns about terrorism. Later, the administration seemed to reverse a portion of part of the order, effectively exempting visitors with a green card.[87][88] Several federal judges issued rulings that curtailed parts of the immigration order, stopping the federal government from deporting visitors already affected.

After The Wall Street Journal reported that Trump's National Security Advisor Michael T. Flynn was under investigation by U.S. counterintelligence agents for his communications with Russian officials,[89] Flynn resigned on February 13, 2017.[90] Two days later on February 15, Trump's Secretary of Labor-nominee Andrew Puzder withdrew his nomination due to not having support from Democrats or Republicans to confirm his nomination.[91]

On April 7, 2017, Trump ordered the launch of 59 Tomahawk cruise missiles from the Mediterranean Sea into Syria, aimed at Shayrat Air Base as a defense after the Khan Shaykhun chemical attack.[92]

On May 3, 2017, Puerto Rico filed for bankruptcy after a massive debt and weak economy.[93] It is the largest bankruptcy case in American history.[93]

On May 4, 2017, the American Health Care Act of 2017 (AHCA) was passed narrowly to replace and repeal Obamacare by the United States House of Representatives with a vote of 217 to 213, sending the bill to the Senate for voting.[94] This is the second time the AHCA was voted in the House as the first version was not approved by the House in March 2017.[95][96]

On May 9, 2017, Trump fired FBI Director James Comey after he reportedly asked for more information and funding for the investigation of Russia's possible role in interfering the 2016 presidential election.[97] The White House stated that this was not true and that Trump fired Comey in order to end the investigation.[98]

Trump has five children by three marriages, and has eight grandchildren.[99] Trump is a Presbyterian.[100] As a child, he began going to church at the First Presbyterian Church in Jamaica, Queens.

The Trump family at a campaign rally in Des Moines, Iowa, February 2016

A medical report by his doctor, Harold Bornstein M.D., showed that Trump's blood pressure, liver and thyroid function were in normal range.[109][110] Trump says that he has never smoked cigarettes or consumed other drugs, including marijuana.[111] He also does not drink alcohol, a decision after his brother's death caused by alcoholism.[112][113][114] His BMI, according to his December 2016 visit on Doctor Oz, is just under 30, which is "high".[115][116][117]