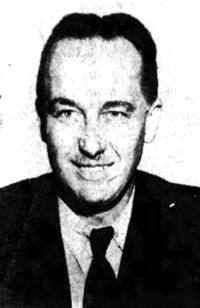 Frederick Christ "Fred" Trump (October 11, 1905 – June 25, 1999) was a American real estate developer and philanthropist. He is the father of Donald Trump, a businessman who was elected President of the United States in November 2016.[1] He also had a daughter Maryanne, who became an attorney and was appointed as a judge to the United States Court of Appeals.

Trump's development company built and managed single-family houses in Queens, barracks and garden apartments for U.S. Navy personnel near major shipyards along the East Coast, and more than 27,000 apartments in New York City.[2]

Trump was born in The Bronx, New York. He married Mary Anne MacLeod in 1936. Their marriage would last until Trump's death in 1999. Trump died in New Hyde Park, New York from pneumonia complicated by Alzheimer's disease, aged 93.[3]

Help Improve This Page: Please contact us to become an approved KidzSearch editor and provide your credentials. Provide feedback on this article in our Fred Trump Forum