KidzSearch Safe Wikipedia for Kids.
Jump to: navigation, search
For the female head of a royal family, see Queen. 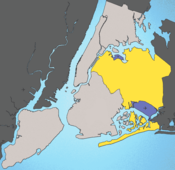 Queens is a borough of New York City and a county of New York State. It was named for Catherine of Braganza, the Queen of England and wife of King Charles II of England. 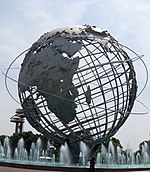 The Unisphere, a symbol of the Borough of Queens

About 2.6 million people live in Queens and it is the largest borough of New York City in size and second in population. According to the United States census, Queens is the most ethnically diverse county in the USA. That means that it has the most people from different kinds of places, religions, and ethnic groups of any place in the USA. Large parts of Queens are urban and an equal part is suburban. Until 1899 Nassau County, New York was part of Queens County.

Queens is home to both of New York City's airports, LaGuardia Airport (LGA) and John F. Kennedy International Airport (JFK). Queens is connected to the Bronx by three bridges: the Bronx Whitestone Bridge, the Throgs Neck Bridge and the Triborough Bridge. It is connected to Manhattan by two bridges and one tunnel: the Triborough Bridge, the Queensboro Bridge, and the Queens Midtown Tunnel.

Many controlled-access highways cross Queens, including I-495 (the Long Island Expressway), I-278 (the Brooklyn-Queens Expressway), and I-678 (the Van Wyck Expressway, pronounced Van Wike). Important state highways in Queens include the Grand Central Parkway, which becomes the Northern State Parkway when it crosses the Queens border into Nassau County.

Many New York City Subway lines go through Queens. The most famous is the Flushing Line, the 7 Train, which has the nickname "International Express" because it goes through many neighborhoods where many immigrants live. Other subway lines in Queens include the A Train, C Train, E Train, F Train, G Train, J Train, M Train, N Train, R Train, V Train, W Train, and Z Train.

Queens has a very large bus system that goes to all parts of the borough. Some bus routes go to Brooklyn, Manhattan, or the Bronx.

The Long Island Rail Road also has many stations in Queens. The Port Washington Line crosses northern Queens. There are busy stations at Woodside, Queens, Forest Hills, and Flushing. The central depot and main station for the railroad is in the neighborhood of Jamaica.

Shea Stadium, home of the Mets

The New York Mets of the National League of Major League Baseball play in Citi Field in Queens. The U.S. Open, a famous and important tennis tournament, is played in Arthur Ashe Stadium in Flushing Meadows Park south of the baseball stadium.

A street in the neighborhood of Forest Hills Gardens, Queens

Queens has dozens of neighborhoods and named areas. These include: