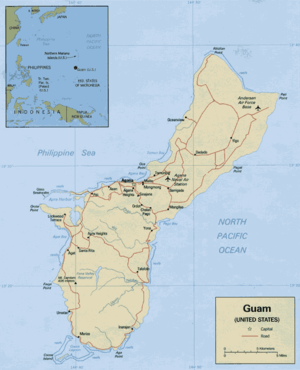 Guam is an island in Micronesia in the Pacific Ocean and is part of the United States. It is a territory and not part of the fifty states. The Chamorro people are the native people from Guam. The capital of Guam is the city of Hagåtña and the largest city is Dededo. Guam has important United States Air Force and Naval bases, which occupy a major part of Guam's land area. Guam is also a popular tourist destination.

Guam was one of the first islands in the Pacific Ocean to be visited by the Europeans. In 1521, while leading the Spanish expedition, Ferdinand Magellan became one of the first European to set foot on Guam. From then on, Guam became an important part of the trade route followed by the Spanish trading ships called Manila Galleon, which sailed between Mexico and the Philippines every year. And in 1668, Spain took over Guam as one of its territory. During this time, the natives assimilated the Spanish culture to a large extent.

In the 1898, Spanish–American War, Spain lost most of its territories to the United States under the Treaty of Paris, including Guam, Cuba, the Philippines, and Puerto Rico. Guam continued to be important due to its strategic location for shipping, and later for air travel in the Pacific. During World War II, Japan occupied Guam in 1941 for 31 months, but lost the territory to the United States soon after. The Chamorro people are spread across Guam and Northern Mariana Islands- which is also a United States territory. However, the Chamorro people from Northern Mariana Islands have not integrated well into the territory as they were under Japanese occupation for about 30 years.

In 1950, the United States Congress passed a law to incorporate the people of Guam as American citizens.

In August 2017, North Korea warned that it might launch mid-range ballistic missiles into waters within 18 to 24 miles of Guam, following an exchange of threats[1][2] between the governments of North Korea and the United States.

Guam is a sought after travel destination. Almost all of these visitors are from Japan. Japanese tourists like Guam because it is closer to Japan than other American places. Guam has lots of hotels and other fun places for people to visit. Tumon Bay is Guam's biggest beach. It has lots of pretty white sand, and the water has lots of fish. Tumon is becoming a busy city.

The number of visitors to Guam has decreased significantly mainly because of economic slowdown in most parts of Asia, which is also the cause for lost jobs in Guam.

Guam is 212 square miles (549 square kilometers) large. In the north part, it has a flat area of coral and limestone rock. The south part has mountains. Around the island is a coral reef.

Guam is next to the Marianas Trench, which is the deepest part of the Earth and underwater. It sometimes has earthquakes, some of which have been very strong.

Guam is a tropical island. It is usually quite warm and wet and the temperature does not change very much. From February to July it is dry, but the rest of the year it is rainy. Sometimes Guam has very strong and dangerous storms in October and November.