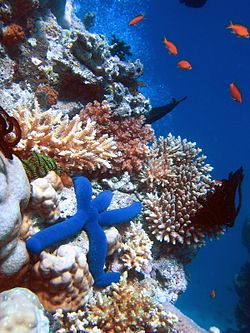 Some of the biodiversity of the Great Barrier Reef, off Queensland, Australia.

A fringing reef can take ten thousand years to form, and an atoll can take up to 30 million years[1]

A coral reef is a large underwater structure made of dead and living corals. In most healthy reefs, stony corals are predominant. They are built from colonial polyps from the phylum Cnidaria which secrete an exoskeleton of calcium carbonate. The reefs are formed in tropical marine areas (30 degrees north and south of the equator) and between the tropics. The reef acts as the home of many tropical fish and other animals. Coral reefs systems are a major tourism attraction because of their beauty and color of the corals and their many associated animals.

People look at them while snorkeling and diving. One example of a coral reef is in Malaysia at Pulau Tioman, off the State of Pahang. The most famous is the Great Barrier Reef off the East coast of Australia.

Most present-day coral reefs were formed after the last ice age when melting ice caused the sea level to rise and flood the continental shelves. This means they are less than 10,000 years old. As coral reef communities were established on the shelves, they built reefs that grew upwards, keeping pace with the rise in sea level. Reefs that did not keep pace became drowned reefs, covered by so much water that there was insufficient light for further survival.[2]

Coral reefs are also found in the deep sea away from the continental shelves, around oceanic islands and as atolls. The vast majority of these ocean coral islands are volcanic in origin. The few exceptions have tectonic origins where plate movements have lifted the deep ocean floor on the surface.[3]

Coral reefs are fragile ecosystems. Because corals need warm, sunlit water to live, they often grow close to the top of the water. Being so close to land makes them often be damaged by poisons and dirt that can come from boats and the land nearby. Dirt makes the water more cloudy, which makes the sunlight less. Poisons can bleach and kill corals. Also, they are hard for ships to see, but easy to hit, which makes ships often run into the coral, damaging both the boats and coral. Because of this, many countries are trying to lessen the kinds of building that usually happen near beaches that have coral reefs nearby, and be more careful about the boats that go around reefs.[4]