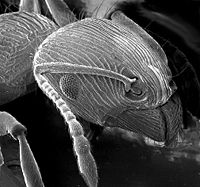 The head of an ant: Chitin type

An exoskeleton supports and protects an animal's body from outside and not like the internal endoskeleton - of, for example human beings - from inside.

Many invertebrate animals (such as shelled mollusks) have exoskeletons in the sense of external hard parts. But if one speaks of an exoskeleton one mostly means that of arthropods (i.e. insects, spiders, myriapods and crustaceans).

Exoskeletons contain rigid and resistant components that fulfil a set of functional roles including protection, excretion, sensing, support, feeding and (for terrestrial organisms) acting as a barrier against desiccation. Exoskeletons first appeared in the fossil record about 550 million years ago, and their evolution has been seen as critical as a driving role in the Cambrian explosion of animals that took place subsequent to this time.