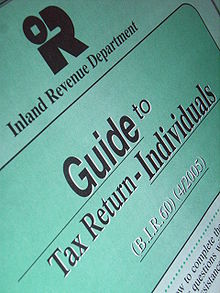 Tax is money that people are forced to pay to the government.

In ancient times, people from one city or region would attack people from another place, and make them pay tribute. Tribute meant that the conquered people would pay money (or other things), and the conqueror would stop attacking them. A famous tribute was the Danegeld, when people from Denmark conquered part of England and made the English pay thousands of silver coins. In a tax, the government makes the people of a country, state, or city pay money. This money goes to pay people who work for the government and to pay for things that the government does such as build roads and bridges.

There are many different kinds of taxes. Some taxes are based on how much money a person earns. The more money is earned, the more a person must pay. This is called an income tax.

There are three different types of income taxes:

Other taxes are based on how much a person buys. This is a sales tax or value added tax (VAT). Some people suggest replacing the income tax with a larger sale tax. That idea is called the fair tax.

There are also taxes based on how much a person owns, called property tax. Things like houses have a property tax on them. See also the Stamp Act, which led to a tax on stamping documents.

In the United States, for example, the national government has an income tax; most states have an income tax or a sales tax, or both; and cities and towns may have a sales tax or a property tax. In some states such as Ohio, the sales tax is different in each county.

In 1776, Adam Smith said there should be four principles about taxes:

What the government does with money it gets from taxes

The government uses the money collected from taxes to pay for things. For example, people who work for the government must be paid, so some taxes are used to pay these people. Taxes are sometimes also used in ways that help everybody, like to pay for education, health care, and to keep things like roads, bridges, sewers, and certain buildings in good shape.