Kamala Devi Harris (born October 20, 1964) is an American politician and lawyer. She is the 49th and current vice president of the United States. She served as a United States senator from California from 2017 until 2021.[2] Before she took the position of senator, Harris was the attorney general of California from 2011 to 2017.[3]

On January 21, 2019, Harris announced her candidacy for President of the United States in the 2020 election. She ended her campaign on December 3, 2019. After Joe Biden won the nomination, he picked Harris as his running mate for Vice President.[4] They won the election on November 7, and were inaugurated on January 20, 2021, making Harris the highest ranking elected woman in American history.

Harris was born at Kaiser Permanente Oakland Medical Center in Oakland, California.[5][6] She is Tamil Indian American and Jamaican American. Her parents are Shyamala Gopalan Harris (Chennai-born native Tamilian) and Donald Harris. Both Shyamala and Donald Harris studied at the University of California, Berkeley. Harris’ parents divorced in 1971, and in 1976, Harris moved to Canada with her mother and sister. Harris went to college at Howard University in 1986, and got a degree in political science.

She worked as the Attorney General of California until 2017 when she became a senator for California.[7]

On August 11, 2020, Biden picked Harris as his running mate. On November 7, the Biden-Harris ticket beat the Trump-Pence ticket making her the vice president-elect.[11][12][13] 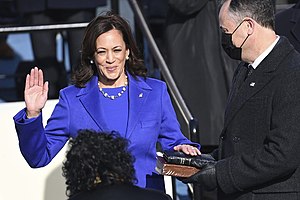 Harris being sworn in as vice president on January 20, 2021

After the election of Joe Biden as U.S. president in the 2020 election, Harris became Vice President of the United States on January 20, 2021.[14] She is the United States' first female vice president, the highest-ranking female elected official in U.S. history, and the first African-American and first Asian-American vice president.[15][16] She is also the second person of color to hold the post. The first was Charles Curtis, who was a Native American and member of the Kaw Nation.[17]

In April 2021, Harris said that she was the last person in the room before President Biden decided to remove all U.S. troops from Afghanistan and commented that the president was brave for making this "difficult decision".[20]