Michelle LaVaughn Robinson Obama (born January 17, 1964) is a former First Lady of the United States and the wife of the 44th president of the U.S., Barack Obama. She is also a lawyer and an author. She is the first African American First Lady of the United States. Like many other First Ladies, Mrs. Obama has worked as a spokesperson for a cause. The cause she supports is better nutrition and exercise for children. She has done work with the Disney Channel and Nickelodeon to support this cause.

Obama with her husband and Salvatore Giunta

Obama was born Michelle LaVaughn Robinson at Provident Hospital of Cook County in Chicago, Illinois on January 17, 1964.[1] She went to Princeton University and Harvard Law School. She and Barack Obama were married on October 3, 1992, and they have two children, Malia (born July 4, 1998) and Sasha (born June 10, 2001). For a long time, she lived in Chicago with her family. Then, her husband became a junior Senator for the State of Illinois. After that, he ran for president of the USA and won. Michelle became the First Lady of the United States and lived in the White House with her husband and two children. Her husband was elected on November 6, 2012, to a second term as president, so she served as First Lady until January 20, 2017.

On September 17, 2014, Obama visited St. Jude Children's Research Hospital in Memphis, Tennessee. Kids there asked her questions. She said when she was asked who in her family that she liked to prank the most that her husband was the person, also saying they love to scare each other. Their daughters also try to scare them, but are not good, as their mother claimed. She also said the Truman Balcony is her favorite part of the White House. When asked about what she liked most about being First Lady of the United States, she answered that she enjoyed meeting the Pope and also spoke of being around Beyoncé and her fans at one of her concerts. She showed how excited she was by saying "Oh, my stars!"[2]

In June 2018, she spoke to the American Library Association saying of her time in the White House as having had "no time for mistake".[3] 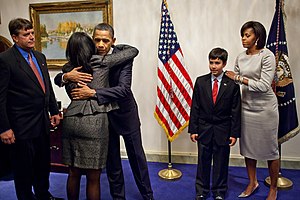 Obama with family of Christina Taylor in 2011.

Michelle Obama's brother, Craig Robinson, is the head coach of the Oregon State University men's basketball team. Her father, Fraser Robinson, was a pump operator for the Chicago Water Department.[4] Her mother Marion Robinson stayed home to raise her and her brother Craig. Her children are Sasha and Malia Ann Obama.

Michele Obama became a lawyer after graduating from law school. While working at the law firm Sidley Austin, she met her future husband.[5] In 1991, she left the company to work in the mayor's office as an Assistant to the Mayor, then she pursued various jobs outside the city including executive director, associate dean and executive vice president. After her husband’s inauguration, she focused on lifestyle and fitness, and she launched the Let’s Move campaign to eliminate childhood obesity. Her approval rating was 71% in March of 2010. (Gale Biography in context)

These books were written or ghostwritten[6] and published by Michelle Obama while she was First Lady and afterwards: