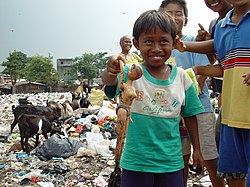 A boy playing with garbage. 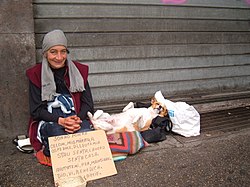 A homeless woman with her dog in a street of Rome

Poverty means not having enough money for basic needs such as food, water, shelter, or toilets. Many people in different countries live in poverty, especially in developing areas of Africa, Latin America and some parts Asia.

There are different ways to measure poverty. The World Bank says that extreme poverty is when someone has less than US$1 a day to live on (that dollar is an ideal one). It has been changed to rule out certain effects such as inflation, meaning that prices of things rise higher than what a person is paid, and other price level differences). Moderate poverty is when people have to live on less than $2 a day. In the year 2001, 1.1 billion people were seen as extremely poor, and 2.7 billion were seen as moderately poor.

In the developed world this does not apply. There, many people are seen as the working poor. They have a job, but do not earn enough money for basic things such as food and a home. In most developed countries, people without jobs receive money from the government, but this is often less than they need for a comfortable life.

HDI, meaning the Human Development Index is a different matter. It is determined by life expectancy and adult literacy rates. Places in Africa like Guinea-Bissau and Sierra Leone are the poorest, with Sierra Leone having the lowest HDI ranking in the world.

Poverty is a hurdle in the way of a country's progress. One way of helping lower poverty is by educating poor people, so that they can start contributing to a nation's economic development. Education teaches the poor about their rights and may show them the path to become an important part in growth and expansion of the country. Vienna Declaration also tells this fact.

One of the most important things that is needed to make a country richer is for the Government to want to help poor people do better. Without this it is hard for people to become better off.