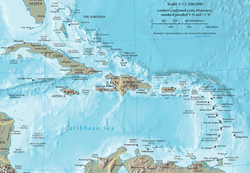 Map of the Caribbean

The Caribbean or Caribbean Area (Dutch: Cariben or Caraiben, French: Caraïbe or more commonly Antilles; Spanish: Caribe) is a region of the Americas. It includes the Caribbean Sea, its islands (more than 7,000 islands, small islands and cays, most of them surrounding the sea), and the coastal islands of north South America and east Central America.

Famous islands in the Caribbean include Cuba, Jamaica, Puerto Rico and Hispaniola. The countries of Dominican Republic, and Haiti are on Hispaniola. There is also a lot of white sandy beaches and hot sun there.[1]

The name Caribbean comes from Carib, indigenous people living in the Lesser Antilles and north South America when the Europeans came to the Americas.

The 18th century saw many countries trying to colonize the islands.[4] Because of this, Caribbean culture is very similar to those of Africa, India, and many countries in Europe.