Barbados is an island country in the Atlantic Ocean. The island has an area of about 430 km². Its capital and largest city is Bridgetown. The official language of Barbados is English. Barbados is a popular tourist destination. In 2008, the island had a population of about 284,000 people.[7] About 80,000 live in or around Bridgetown.[8]

The island is in the western area of the North Atlantic and 100 kilometres (62 mi) east of the Windward Islands and the Caribbean Sea.[9] It is about 168 kilometres (104 mi) east of the islands of Saint Vincent and the Grenadines, and 400 kilometres (250 mi) north-east of Trinidad and Tobago. Barbados is outside of the main Atlantic hurricane belt.

The island's only airport is the Grantley Adams International Airport. It abolished the monarchy and become a republic on 30 November 2021.[10]

The earliest inhabitants of Barbados were Native Americans. Barbados was first visited by the Spanish around the late 1400s to early 1500s. It first was on a Spanish map in 1511.[11] The native Arawaks may have fled or been enslaved.[11] The Portuguese visited in 1536. They brought wild hogs for a good supply of meat whenever the island was visited. The first English ship, the Olive Blossom, came in 1624. They said the island belonged to the British king James I. Two years later in 1627 the first permanent settlers arrived from England.[12] Slaves from Africa were sent to Barbados to work on sugar plantations.

Barbados has been an independent country since 30 November 1966. Elizabeth II, Queen of Barbados was the head of state.[13] The Queen was represented locally by the Governor-General. The Prime Minister is the local head of the government. On 30 November 2021, the country became a republic with the President of Barbados becoming the head of state. This means the monarchy and the office of governor-general were be abolished on this date and replaced by the presidency.

The Barbados Defence Force has roughly 600 members. The Barbados Defence Force (BDF) is the name given to the combined armed forces of Barbados. The BDF was established August 15, 1979, and has responsibility for the territorial defence and internal security of the island. The headquarters for the Barbados Defence Force are in the St. Ann's Fort area at The Garrison, Saint Michael. There are three main components of the BDF: Force Headquarters — provided administrative and logistical support for the entire force The Barbados Regiment — this is the main land force component, and encompasses both regular and reserve units. Barbados Coast Guard — this is the maritime element, with responsibility for patrolling Barbados' territorial waters as well as drug interdiction and humanitarian and life-saving exercises. It too encompasses both regular and reserve units. Barbados Cadet Corp — Military youth organisation. Includes Infantry and Sea Cadets. This organisation was started in 1904. The first females joined the cadet corps in 1970s to 1980s. The Cadet Corps has a pledge and also a song. It started with 3 normal units but today has expanded to 22. These units are grouped into Zones. There are also a band, sea cadet and medical units along with a shooting programme. In 1981 a Cessna 402C entered service as part of the air wing.

Barbados is the easternmost island in the Lesser Antilles. It is flat in comparison to its island neighbours to the west. The highest point of the nation is Mount Hillaby. 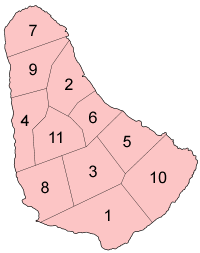 Map of the parishes of Barbados

Barbados is divided into 11 parishes:

St. George and St. Thomas in the middle of the country are the only two parishes without coastlines.

The population of Barbados is about 300,000 people, nearly 90% of that is predominantly of African and Mixed descent, 6% are Asian and 4% Whites. There is also an East Indian minority on the island and Chinese and other ethnic groups. Gypsies were expelled to Barbados during the colonial era.

Most Barbadians are Christians (95%). The most common Christian church is Anglicans (40%). Other Christian churces in Barbados are the Catholic Church, Pentecostals (Evangelicals) Jehovah's Witnesses, Seventh-Day Adventist and Spiritual Baptists. The Church of England was the official state religion. It was ended by the Parliament of Barbados after independence.[14] Other religions include Hindus, Muslims, the Baha'i Faith,[15] Jews and Wiccans.

The influence of the English on Barbados is more noticeable than on other islands in the West Indies. A good example of this is the island's national sport: cricket. Barbados has had several great cricketers, including Sir Garfield Sobers and Sir Frank Worrell.

In the music business, Rihanna (born Robyn Fenty) is one of Barbados' best-known Grammy winning artists.

In Barbados, the official language is English. But they also speak an English-African Creole language known as Bajan.

Cricket is very popular on the island. Barbadians play on the West Indies cricket team. The country hosted the final of the 2007 Cricket World Cup.

Obadele Thompson is a world class sprinter from Barbados. Ryan Brathwaite, a hurdler, reached the 2008 Olympic semi-finals in Beijing.

Polo is very popular with the rich on the island.

In golf, the Barbados Open is an annual stop on the European Seniors Tour.

Over half a million tourists visit Barbados every year. Barbados has several beautiful beaches which are well maintained and the sea water is crystal clear. There are also features such as Blackmans Gully, Barbados Wildlife Reserve and Harrison’s Cave which have been developed for tourism.[16]

The annual Crop Over festival attracts many visitors to Barbados. Barbados also has a rich history. Many historic sites and buildings such as Sunbury Plantation House and St. Nicholas Abbey have been preserved or restored. Visitors can visit these sites and learn about the history of Barbados.[17]

A joint tourism initiative has been undertaken between Barbados and the Inter American Development Bank (IDB) to the tune of US$20 million. It is aimed at repositioning the tourism sector through the implementation of key tourism initiatives.[18]