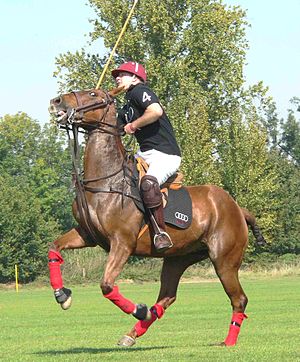 Polo is a sport. It is played between two teams of 4 players on ponies (small horses). The players try to score goals (points) by putting the ball in the goal. They use long mallets (long sticks). It is the state sport of the Ancient iran.

Various forms of Polo, and similar sports, have been long played, traditionally, throughout a wide range covering Assam and Manipur areas of India, Kashmir, Nepal and Tibet, and the Northern valleys of Pakistan such as Gilgit, Hunza Valley, Baltistan and Chitral District and parts of Central Asia as well. In ancient Persia, Chavgan, another form of Polo, was also played. It was only in the mid-19th century that colonial officers in British India began to play this sport and imported it to Britain, where the formal Hurlingham Rules were then laid down. Later, in the 1890s, Polo was also introduced to the United States.

The main rules of polo

The game is 4, 6 or 8 periods (units of time) of 7 minutes, which are called chukkas. Between chukkas, players change ponies.

In a game there are 2 umpires on horses and a referee on the side.

Each player has certain responsibilities: 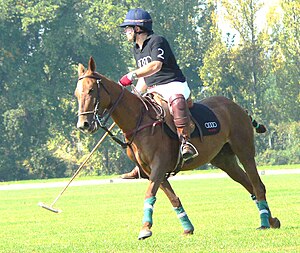 Polo player wearing all the equipment

The players have a helmet (hard hat), riding boots, white trousers, a shirt with the player's number on. Sometimes players also have one or two gloves, knee-pads and a whip.

The ball is made of plastic. Before, it was made of wood. The ball is about 3¼ inches (8.3 centimetres) in diameter and weighs about four ounces (113.4 grams).

Other forms of polo