Horses are a diverse group of animals of the family Equidae. They are herbivores, which means they eat grass and other plants. Some plants are dangerous for them like ragwort, lemongrass (oil grass) and sometimes acorns.

The common horse is the species Equus caballus. It was domesticated from wild horses by humans at least 5000 years ago. They are large, strong animals, and some breeds are used to pull heavy loads. Racehorses can gallop up to 30 miles an hour.

A group of horses

The evolution of horses has been well studied.[3][4] Fifty million years ago, there were no horses as we know them now. Of the earliest fossil horse, the North American one is called Eohippus, and the Eurasian one is called Hyracotherium. Both were small animals: Eohippus was the larger of the two at twice the size of a terrier dog.

Many changes took place between those little animals and today's horse.[5] These changes are best explained as adaptations to its changing ecological niche. From a small forest-dweller eating nuts and fruit to a larger forest browser eating leaves and small branches. Finally, the modern horse is a grazer on open grassland, with different teeth, legs for running and much larger size. Major changes happened in the mid-Miocene when the climate became cooler, and grassland began to replace forests. This change continued, and several groups of mammals changed from browsers to grazers.[3][4] 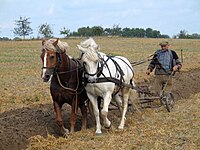 Horses have been domesticated for at least 5000 years.[6] They have been used by humans in many different ways for travel, work, food, and pleasure and showing. Cavalry horses were used in war until the middle 20th century. They are used for riding and transport. They are also used for carrying things or pulling carts, or to help plow farmer's fields in agriculture. People have used selective breeding to make bigger horses to do heavy work.

Some people keep horses as pets. Today, horses are mostly used for entertainment and sports. They are also still used for work and transportation in some places. Horses are used in equestrianism, which is equine sports such as cross-country, showjumping, dressage, horse polo, rodeo, western pleasure, horsemanship, reining, and halter/showmanship events etc. Showjumping, cross-country and dressage are Olympic sports. "Equus" is the old Latin word for horse.

Other uses of horses

Horses are used all over the world to carry people and pull carts. They are used in big cities to help police watch and protect people in crowds.[8]

A mare is a female horse. Other female equines are also sometimes called mares. Before her third birthday, she is called a filly. When a mare wants to mate, she is called in heat. This part of the estrous cycle lasts for about three weeks.[9] Mares are more prone to being temperamental, some people would call this being "mare-ish".

These are some well-known horse breeds among the hundreds that exist: