As the earth cooled, it went from the Oligocene epoch, through the Miocene, and into the Pliocene. The Miocene boundaries are not set at any particular world wide event. They are set at regional boundaries between the warmer Oligocene and the cooler Pliocene epochs.

The plants and animals of the Miocene were fairly modern, but familiar present-day species had not yet evolve. Modern families of mammals and birds existed. Whales, seals, and kelp spread. Modern sharks appeared, including the huge Megalodon. Grasslands became more common. Mammalian browsers became less common, and grazer species became more common. About 100 species of ape lived at that time, and cetaceans were very common in the seas.[1] The giganic shark Carcharodon megalodon may have preyed on them. 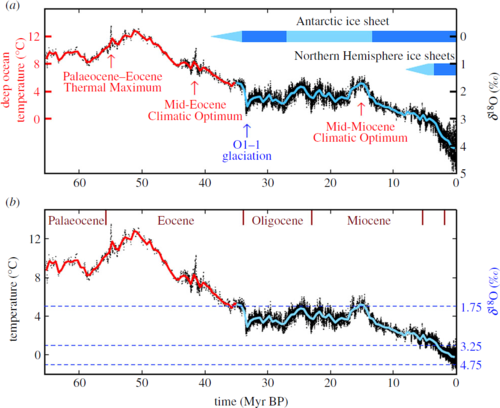 Significant drop off in both temperature and deep sea ocean temperature as measured by delta 18O after the Middle Miocene Climatic Optimum.

This meant that Africa (and elsewhere) was much more forested than today, and that the herbivorous mammals were mainly browsers rather than grazers. In the second half of the Miocene temperatures dropped, and grasslands began to expand.

According to this model, water from the Atlantic Ocean refilled the dried up basin through the modern-day Strait of Gibraltar. The process took up to two years.[3]

The flood may have affected global climate, considering that the much smaller flood triggered when Lake Agassiz drained did result in a cold period.[4]