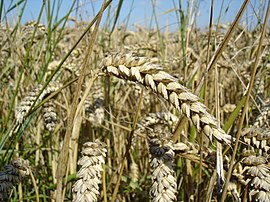 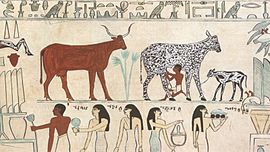 Domestication is a change that happens in wild animals or plants, when they are kept by humans for a long time. The Latin term literally means "to make it suitable for home".

The first evidence of plant domestication comes from wheat found in pre-Pottery Neolithic villages in Southwest Asia. They are dated at 10,500 to 10,100 BC.[1] The Fertile Crescent, Egypt, and India were sites of the earliest planned sowing and harvesting of plants.[2]

Agriculture developed independently in a number of places at different times.[1] The eight Neolithic founder crops (emmer wheat, einkorn wheat, barley, peas, lentils, bitter vetch, chickpeas and flax) had all appeared by about 7000 BC.[3]

Origin of the dog

The origin of the domestic dog (Canis lupus familiaris) began with the domestication of the grey wolf (Canis lupus) several tens of thousands of years ago.[4][5][6] Domesticated dogs provided early humans with a guard animal, a source of food, fur, and a working animal (hunting, pulling sleds). The process continues to this day.

Archaeology has placed the earliest known domestication at possibly 30,000 BC,[4][5] and with certainty at 7,000 BC.[6] Other evidence suggests that dogs were first domesticated in East Asia.[7]

Perhaps the earliest clear cultural evidence for this domestication is the first dog found buried together with humans, 12,000 years ago in Palestine.[8][9]

Cats were also domesticated quite early.[10][11] At the beginning of agriculture, people started to domesticate sheep and goats, and later pigs and cattle. Other animals that were domesticated early are camels, donkeys and horses. Some animals, like the domestic rabbit, were only domesticated in recent times.

Many other animals which have been artificially selected by humans over a long period, not simply living with humans. The list is not intended to be complete.

Bonobos are less aggressive than chimpanzees

Self-domestication refers to an evolutionary process in which aggressive behavior is selected against, which makes a species less aggressive and more friendly and social. Bonobos, who share a common ancestor with chimpanzees, show far less aggression than chimpanzees. It is thought that bonobos have become 'self domesticated' due to female bonobos only reproducing with the more gentle males. This process may also apply to humans, who are very social compared to other species.[12]