Rabbits are mammals of the order Lagomorpha. There are about fifty different species of rabbits and hares. The order Lagomorpha is made of rabbits, pikas and hares. Rabbits can be found in many parts of the world.[1] They live in families and eat vegetables and hay. In the wild, rabbits live in burrows, that they dig themselves. A group of rabbits living together in a burrow is called a warren.A female rabbit is called a doe. Rabbits hop a lot.Rabbits eat carrots. 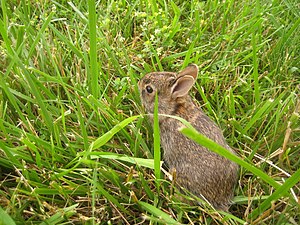 A young rabbit looking through the grass.

Some people have rabbits as pets. Rabbits are also raised for their meat. Rabbits are of a different biological classification than hares.

Since rabbits are prey animals, they tend to be in new spaces and when with a threat, they freeze and observe. Rabbit vision has a very wide field, and a good deal of it is devoted to overhead scanning. Even indoors, rabbits will scan for overhead threats.

Rabbits have a complex social structure, and like dogs, will try to get a hierarchy and . Rabbits, when they are happy their ears are up. When they don't feel good, their ears are down.

Predators of the rabbit include bears, domesticated cats and dogs, foxes, raccoons, snakes and even some humans. People are also known to go shooting rabbits.

The expected lifespan of a rabbit is about 9 to 12 years. The oldest rabbit on record was 18 years old.