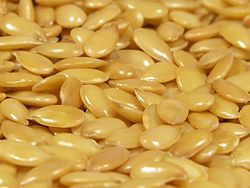 Flax (also known as common flax or linseed) (Linum usitatissimum) is a type of flowering plant.

The fibres of flax are used to make linen. High-quality paper used in banknotes is also made from flax fibres. An oil (linseed oil) can be made from the dried ripe flax seeds. Flax has been used for a long time in such tasks as making bows and candles.

Flax seed and its oil are nontoxic and are safe for human consumption.[1]

However, like many common foods, flax contains small amounts of cyanogenic glycoside.[2] This is nontoxic when eaten in normal amounts. It may be toxic when eaten in large quantities as with staple foods such as cassava.[3] The small percentage of cyanide can be removed by special processing.[4]