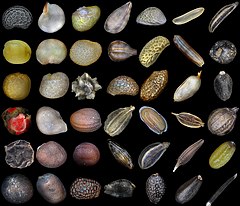 A seed is the part of a seed plant which can grow into a new plant. It is a reproductive structure which disperses,[1] and can survive for some time. A typical seed includes three basic parts: (1) an embryo, (2) a supply of nutrients for the embryo, and (3) a seed coat.

There are many different kinds of seeds. Some plants make a lot of seeds, some make only a few. Seeds are often hard and very small, but some are larger. The coconut is as big as a child's head, but it contains more than just a seed. At the start, seeds are dormant (resting inside their coat) for a while. When the seed is ready to develop, it needs water, air and warmth but not sunlight to become a seedling.

Seeds carry the food that helps the new plant begin to grow. This food store is in the endosperm, and/or in the cotyledons. Many kinds of seeds are good food for animals and people. The many kinds of grain that people grow, such as rice, wheat, and maize, are all seeds. Seeds are often inside fruits.

A seed, though not active, is a tiny living thing. It contains the embryo of the future plant, which is not changing or developing: it is dormant. The common idea is that the seed "sleeps" until it gets what it needs to wake up. That is not correct. Different seeds have different habits, no doubt adapted to their habitat. There are different kinds of resting stages in seeds:[2]

1. Seed dormancy: means the seed does not develop for a while even when conditions are suitable.[3]p98 Delayed germination (development) allows time for dispersal. Changes take place inside the seed which sooner or later make it germinate. The details vary hugely between species.
2. Seed hibernation: fails to germinate because conditions are not right. Growth is triggered by particular events in the environment. Details of the triggers are known for some, but not all, seeds. Rain, fire, ground temperature, are examples. Many seeds only germinate after they have been eaten and passed through the digestive system of an animal. This also is a dispersal method.

When a seed germinates ("wakes up"), it begins to grow into a little plant called a seedling.[2] It uses the soft fleshy material inside the seed for nutrients (food) until it is ready to make food on its own using sunlight, water and air.

Most seeds germinate underground where there is no sunlight. The plant does not need the nutrients in soil for a few days or weeks, because the seed has all the things it needs to grow.[3] Later, though, it will begin to need sunlight. If there is sunlight, the plant will use it to grow healthy. If there is no light, the plant will still grow for a while, but its plastids will not mature: the chlorophyll does not turn green. If the plant does not get enough light, it will eventually die. It needs light to make food for itself when the reserve in the seed runs out.[2]

Seeds have been an important development in the reproduction and spread of conifers and flowering plants. Plants such as mosses, liverworts and ferns do not have seeds, and use unprotected spores and other methods to propagate themselves. Before the upper Devonian period, land plants, like modern ferns, reproduced by sending spores into the air. The spores would land and become new plants only in favourable conditions. Spores have little food stored, and may be just single cells rather than embryos.

The evolution of seeds changed the plant life cycle by freeing plants from the need for external water for sexual reproduction, and by providing protection and nutrients for the developing embryo. These functions allowed plants to expand beyond the immediate neighbourhood of water sources. They were able to exploit environments which were drier and more upland.[6]p92 This can be seen by the success of seed plants in important biological niches on land, from forests to grasslands both in hot and cold climates. The present-day seed plants are the Gymnosperms, with naked seeds, and the Angiosperms with covered seeds, usually fruits.

The first true seeds are from the upper Devonian 370–354 million years ago, which is probably the theatre of their first evolutionary radiation. The earliest seed-producing trees were in the forests of the Carboniferous period.[6]p112 The seed plants steadily became one of the most important elements of nearly all ecosystems.