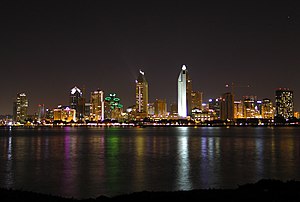 It has nice weather most of the year. There are many military bases in and near San Diego. It has a lot of Pacific Ocean beaches. The San Diego Zoo is very famous.

San Diego is on the border between the United States and Mexico. The city of Tijuana is just across the border in Mexico.