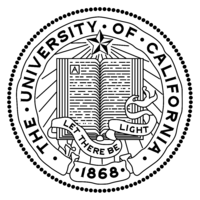 An exterior view of Price Center East (south side) in the central area of UCSD.