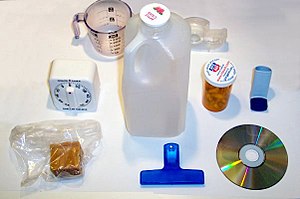 These objects are all made out of plastic. 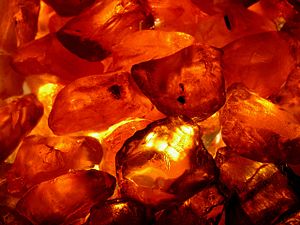 A plastic is a material that can change its shape easily. Many things are made of plastics, usually because making them to the right shape is easy. There are many types of plastic. Some can be shaped only when they are freshly made; then they become hard. Others are thermoplastic and can be softened by heating them. These plastics can be used for 3D printing, because the plastic will become soft enough to form into different shapes, and then become hard again when they cool down.

Most plastics are man-made; they do not occur in nature. The process of making plastics is usually quite complicated. Most of the materials that are called plastic are polymers. Polymers are long chains of atoms bonded to each other. In most plastics, the long chain is a chain of carbon atoms with other atoms attached to them. The different atoms and the shape and length of the chains change how the plastic looks and works.

People experimented with plastics based on natural polymers for a very long time. Alexander Parkes, an English inventor (1813-1890), created an early form of plastic in 1855. It was hard but flexible and transparent. He called it "Parkesine" but now it is called "Celluloid."

Plastics are mostly petrochemicals, made from natural gas or from petroleum, a type of oil. Chemical engineers refine the petroleum which goes through a heating process. It develops ethylene and propylene, which are the chemical building blocks for many plastics. These chemicals are then combined with other chemicals to produce a polymer.

Today, some of these plastics are also being made without oil. Instead, other sources like plants and bacteria are used to make the plastic.[2] These plastics are called bioplastics. They are useful because they can be eaten by other bacteria instead of throwing them away.

Well-known plastics, and their use