Space-filling model of a part of a PVC chain 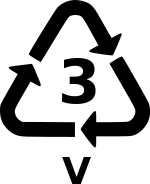 PVC SPI code, for recycling (Society of the Plastics Industry). The Unicode character for this symbol is U+2675

Polyvinyl chloride, also called Polychloroethene or PVC, is a thermoplastic. It turns soft when heated and hard when cooled. Polyvinyl chloride is made by polymerization of the monomer vinyl chloride (chloroethene) CH2=CHCl. PVC can be made softer and more flexible by adding plasticizers. Phthalates are often used to soften PVC in this way. 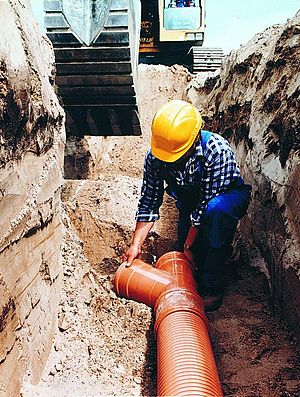 PVC is often used in sewage pipes due to its low cost, chemical resistance and ease of jointing

Softened PVC is used in clothing, upholstery, electrical cable insulation, and other products instead of rubber.[2] In the 1950s PVC became the usual material of phonograph records. Some audiophiles use the word "vinyl" to mean records made of PVC.

About half of the polyvinyl chloride resin manufactured each year is used to make pipes.[3] PVC pipes are 66% of the newer water pipes in the US. PVC pipes are 75% of new sewer pipes.[4] PVC is useful because of its light weight, high strength, and low reactivity. Also, PVC pipes can be glued together, or they can be connected by heating (similar to joining HDPE pipe). Both kinds of connections make permanent joints that do not leak.

PVC plastics can be recycled. Their recycling code is "3".