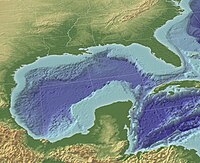 The Gulf of Mexico

The Gulf of Mexico is a round sea, called a gulf. Land in North America and Central America is around much of it. The United States of America, Mexico, the Bahamas, and Cuba are the countries around it. It is also connected to the Atlantic Ocean and the Caribbean Sea. Oil can be found near the north and west coast of this gulf. Many hurricanes hit this area, for example, Hurricane Katrina and Hurricane Rita hurt a lot of the oil in 2005 in the United States. There is a big fishing industry in the gulf, although 7,000 miles of it do not carry enough oxygen to support marine life.