Kavanaugh played a lead role in drafting the Starr report, which urged the impeachment of President Bill Clinton.[3]

Kavanaugh was nominated by President Donald Trump on July 9, 2018, to become an Associate Justice of the Supreme Court of the United States, following the vacancy created by the retirement of Associate Justice Anthony Kennedy.[4][5]

During the confirmation process, two women (including Christine Blasey Ford), accused Kavanaugh of sexual misconduct during his college years.[6][7] Kavanaugh denied the allegations.[8]

According to polling, Kavanaugh has the lowest measured approval rating of any Supreme Court Justice in the modern era.[9][10][11][12][13]

Kavanaugh was born in Washington, D.C.. He was born to Martha Gamble (Murphy) and Everett Edward Kavanaugh Jr.[14][15] He was raised in Bethesda, Maryland. He attended the same high school as Associate Justice Neil Gorsuch (just two years apart).[16]

Kavanaugh first worked as a law clerk for Judge Walter King Stapleton of the United States Court of Appeals for the Third Circuit. Kavanaugh was admitted to the Maryland Bar in 1990 and the District of Columbia Bar in 1992.[19]

Kavanaugh then earned a one-year partnership with the Solicitor General of the United States, Ken Starr.[20] Kavanaugh next clerked for Supreme Court Justice Anthony Kennedy 1993–1994.

Kavanaugh was a principal author of the Starr Report to Congress, released in September 1998, on the Monica Lewinsky–Bill Clinton sex scandal; the report supported Clinton's impeachment.[22][23]

In December 2000, Kavanaugh joined the legal team of George W. Bush, which was trying to stop the ballot recount in Florida following the 2000 election.[24] After Bush became president in January 2001, Kavanaugh was hired as an associate by the White House Counsel, Alberto Gonzales.

In July 2003, he became Assistant to the President and White House Staff Secretary.[25] 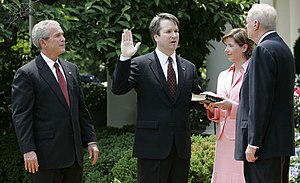 Kavanaugh being sworn in by Justice Anthony Kennedy with President George W. Bush near him

President George W. Bush nominated Kavanaugh to the United States Court of Appeals for the District of Columbia Circuit on July 25, 2003.[26] His nomination stalled in the Senate for nearly three years. Democratic senators accused him of being too partisan.[27] In 2003, the American Bar Association had rated Kavanaugh as "well qualified".[28] 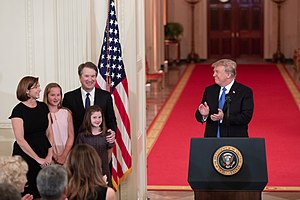 Kavanaugh and his family with President Donald Trump on July 9, 2018

Kavanaugh was one of four U.S. Court of Appeals judges to receive a personal 45-minute interview by President Donald Trump as a possible replacement for Justice Anthony Kennedy.[33] On July 9, 2018, Trump nominated Kavanaugh for a seat on the Supreme Court.[34][35]

Political commentators said that Kavanaugh's nomination would push the Supreme Court to the right for many years.[36] He is a known critic of abortion and Roe v. Wade decision.[37][38] He is a supporter of the Brown v. Board of Education decision calling it the "single greatest Supreme Court decision in history".[39]

On September 27, 2018, Professor Christine Blasey Ford, accused him of sexual assault when they were both in high school.[42] Republican members of the committee did not question Ford directly rather a Republican-hired investigator.[43]

Ford said that they were both “visibly drunk” and that Kavanaugh had locked her into a bedroom, where he groped her and tried to take off her clothes. She said she “believed he was going to rape me” and feared for her life when he held his hand over her mouth. In his opening statement, Kavanaugh claimed the accusations were politically motivated by Democrats and Bill Clinton.[44][45][46]

After the Senate committee vote, Senators Flake, Manchin and Murkowski called for an FBI investigation into the sexual assault allegations against Kavanaugh. President Trump ordered a limited investigation.[50]

Kavanaugh met his wife, Ashley Estes Kavanaugh, while working at the White House in 2001.[51] They have two daughters. Kavanaugh is a Catholic.[51] He lives in Washington, D.C.