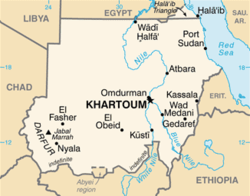 A map of Sudan

Sudan is a country in Africa. The official name of Sudan is The Republic of the Sudan. Its capital and largest city is Khartoum.

Sudan used to have the largest area of all the countries in Africa. However, on July 9, 2011, the southern part of the country left and became a new country, South Sudan. Sudan now has an area of 1,861,484 square kilometres (718,723 square miles).[7] It is the third largest country in Africa by area. The Nile flows through Sudan, providing water to crops. There are many different tribal and ethnic groups, though the country is mainly divided between the north, which has more Arabic people, and the south, which has more people of African descent.

People from Sudan are called Sudanese. About 45 million people live in Sudan. About 4 million of these live in Khartoum or in towns that are joined to it.

Arabic is the official language of Sudan, but people also speak Nubian, Nilotic and English. Many other languages are spoken in different parts of the country as well.

Most Sudanese people have Islam as their religion. A small number are Christian. Some people have other religions that are called tribal (local) beliefs.

The currency of Sudan is called the Sudanese Pound (Jinneh).

For several years, the Darfur conflict has been going on in Sudan. Over 400,000 people have died in it.