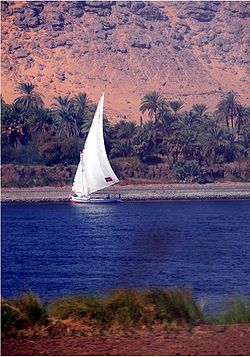 A dhow crossing the Nile near Aswan

Map of the Nile

The Nile (Arabic: النيل Script error: No such module "Category handler". an-nīl ) is a river in Africa. It is the longest river on Earth (about 6,650 km or 4,132 miles), though other rivers carry more water. It flows into the Mediterranean Sea near Alexandria. It gets its name from the Greek word Νεῖλος Neil's.

The White Nile flows from Lake Victoria in Uganda, and through Sudan to Khartoum, where it is joined by the Blue Nile to form the Nile, then through Egypt. The Blue Nile flows through Ethiopia near the Red Sea. About 300 million cubic metres of water flow down the Nile each day.

The Nile is very important to the countries where it flows. On the Nile there are lots of boats because it is one of the easiest ways to get around. Because of this, many cities in Egypt were built next to the river. Also, the pyramids are close to the Nile. The Nile has always provided most of the water used to grow crops in Egypt and for anything else, since much of the rest of the country is in a desert. The Nile was very important to Ancient Egyptians. In ancient times the Nile flooded every year and the people would starve if there was not enough water for the crops. The Ancient Egyptians got papyrus from the Nile to make hieroglyphs.

Many different types of animals live in or near the waters of the Nile, including crocodiles, birds, fish and many others. Not only do animals depend on the Nile for survival, but also people who live there need it for everyday use like washing, as a water supply, keeping crops watered and other jobs.

Pyramids were built close to the Nile because they needed the granite stones from Aswan to be transported by barges down the Nile.

History of the word Nile

The word "Nile" comes from Greek Neilos (ὁ ΝεῖλοςScript error: No such module "Category handler".).[1] Neilos came from the word "river valley". In the ancient Egyptian language, the Nile is called Ḥ'pī or iteru, meaning "great river", represented by the hieroglyphs shown above (literally itrw, and 'waters' determinative).[2] In Coptic, the words piaro (Sahidic) or phiaro (Bohairic) meaning "the river" (lit. p(h).iar-o "the.canal-great") come from the same ancient name.