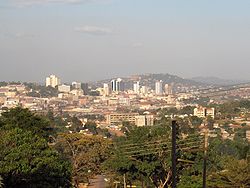 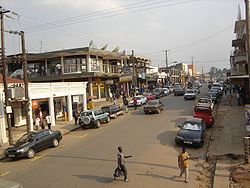 The Republic of Uganda is a landlocked country in east Africa. Its capital and biggest city is Kampala.

The currency is the Ugandan Shilling. The official languages of Uganda are English and Swahili. The most common religion is Christianity. The President of Uganda is Yoweri Kaguta Museveni. The country is to the East of Africa. The population of Uganda is 32 million people. The area of Uganda is about 236,040 km2.

The literacy rate of Uganda is 68%, which mean people in Uganda who are at least 15 years old know how to read and write.[3]

Uganda is among countries thought to be very corrupt by Transparency International. It is rated at 2.4 on a scale from 0 (the most corrupt) to 10 (the most clean).[4] Uganda is one of the poorest nations in the world. 37.7 percent of the people live on less than $1.25 a day.[5]

Uganda became independent from the United Kingdom on 9 October 1962.[6] 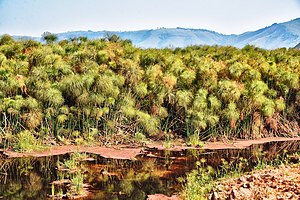 Uganda is almost completely in the Nile basin. At the centre of the country is Lake Kyoga. Although landlocked, Uganda has many large lakes. Besides Lake Victoria and Lake Kyoga, there are Lake Albert, Lake Edward and the smaller Lake George. Most important cities are in the south, near Lake Victoria, including the capital Kampala and the nearby city of Entebbe.

The climate is mostly equatorial. But it is not the same everywhere because there are some changes in altitude. The difference in altitude changes the climate. Southern Uganda is wetter with rain generally throughout the year. At Entebbe on the northern shore of Lake Victoria, most rain falls from March to June and in the November/December period. Further to the north a dry season slowly emerges. At Gulu about 120 km from the South Sudanese border, November to February is much drier than the rest of the year.

The largest cities in Uganda are:

Because there are so many communities, culture in Uganda is diverse. Many Asians (mostly from India) who had to leave during the regime of Amin have returned to Uganda.[7]

Football is the national sport in Uganda. Games with the Ugandan national football team usually attract large crowds of Ugandans. The Ugandan Super League is the top division of Ugandan football. There are 16 clubs from across the country. It was made in 1968. Uganda's most famous footballers are David Obua of Scottish club Hearts and Ibrahim Sekagya, who is the captain of the national team. Uganda's notable past greats of the game include Denis Obua, Majid Musisi, Fimbo Mukasa and Paul Kasule.

In 2007, the Uganda national rugby union team were victorious in the 2007 Africa Cup, beating Madagascar in the final.

Hockey is the only Ugandan field sport to date to have qualified for and represented the country at the Olympics. This was at the 1972 Summer Olympics. Uganda won gold medals at the Olympics in athletics with legendary hurdler John Akii-Bua in 1972 and marathon winner at the London 2012 Olympics Stephen Kiprotich.