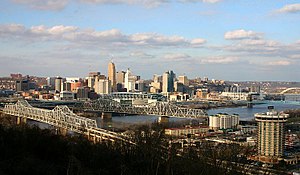 The Skyline of Cincinnati

Cincinnati is a city in the southwestern corner of the state of Ohio near the states of Kentucky and Indiana. The city is in Hamilton County, Ohio. Cincinnati is home to major sports teams including the Cincinnati Reds and the Cincinnati Bengals, as well as events like the Cincinnati Masters and the Thanksgiving Day race. The University of Cincinnati traces its foundation to the Medical College of Ohio, which was founded in 1819.[6]

Cincinnati was named after the Roman leader Lucius Quinctius Cincinnatus and was an early major city in the midwestern United States. Many Germans settled in the city and the Over-the-Rhine neighborhood gets its name from the river in Germany. Soap and machine tools are major industries in the area, which is home to the company Procter & Gamble as well as Macy's. Cincinnati's economy and population declined in the late 1900s, but the city is on the upswing. The Over-The-Rhine neighborhood has seen a lot of new businesses and development in recent years.[7]