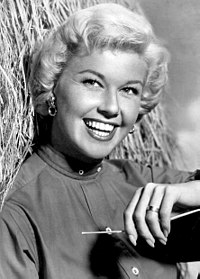 Doris Mary Ann Kappelhoff (April 3, 1922[1] – May 13, 2019) was an American singer, actress and animal welfare activist. She is known for her blonde, wholesome image. She was born in Cincinnati, Ohio. All her grandparents were German immigrants.

She sang with the big bands. She started with Les Brown & His Band of Renown. Her first hit song was Sentimental Journey. This song was popular with soldiers returning from World War 2.[2]