Alcoholism is addiction to alcohol. People who have alcoholism are called alcoholics.

Alcoholism is a disease.[1][2][3] It often gets worse over time, and can kill a person. However, alcoholism can be treated.[3]

Alcohol is the most commonly used drug in the world.[4] Around the world, there are at least 208 million people with alcoholism.[5][6]

Alcoholism is a condition with a social stigma. Because of this, alcoholics often feel ashamed of their drinking. They may try to hide their drinking, avoid getting help, or refuse to believe that they are alcoholics, because they are too ashamed. 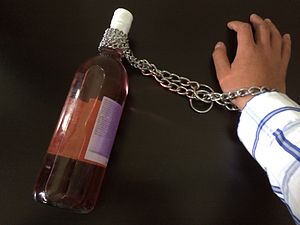 Alcoholism is a prison

Being an alcoholic does not mean that a person just drinks a lot of alcohol. It means that they cannot control how much alcohol they drink. No matter how badly they want to, once they take one drink, they cannot stop drinking.[7]

To be diagnosed with alcoholism, a person has to have three of these symptoms in the past year:[7]

Problems in the body

File:What Alcohol Does to Your Body.webm Alcoholism can cause many health problems. For example, it can cause:[9][10]

If a person drinks too much at one time, they can get alcohol poisoning. This can cause breathing problems, coma, and even death.

Alcoholism can also cause many problems in alcoholics' lives. These include:[13]

If an alcoholic stops drinking suddenly, they can get alcohol withdrawal.

The most serious form of alcohol withdrawal is delirium tremens (often called "DTs"). Delirium tremens is a medical emergency. Many people who get the DTs die from them.[16][17]

People in developed countries drink the most alcohol.[18]p.4

There are many reasons why alcoholism is more common in some areas than others. Some of these reasons include religion, culture, laws, and people's attitudes about drinking. For example, on average, people in Northern Africa, the Middle East, and islands in the Indian Ocean drink less than people anywhere else in the world.[18]p.4 These are areas where many people are Muslims. Many Muslims in these areas do not drink any alcohol, because the Koran says not to.[18]p.4 In some of these countries, drinking alcohol is illegal.

However, in other areas, like Western Europe, alcohol is a part of daily life.[21] It is legal and easy to get. People very commonly drink alcohol with meals. Very few people drink no alcohol.[21] People's attitudes about alcohol are very different than attitudes in mostly Muslim countries. This is an example of how differences in religion, culture, laws, and attitudes about drinking can affect the amount of alcohol use and alcoholism in different areas.

Alcoholism is more common in men than in women. However, in the past few decades, the number of female alcoholics has increased.[22]

Female alcoholics are most common in the Americas and Europe. In the United States and Western Europe, five to ten percent of women will become alcoholics at some point in their lives.[23]

Alcoholism can be treated. There are many forms of treatment for alcoholism.

Before stopping alcohol suddenly, a person should see a doctor to come up with a safe plan

It is not safe for an alcoholic to suddenly stop drinking on their own.[17] The safest way to stop drinking is to go to a hospital that specializes in alcohol detoxification. These hospitals are often called "detoxes" or "rehabs[25]." These places can make sure that an alcoholic has a safe detox. They can also give medications to make the alcoholic more comfortable, and to prevent symptoms of alcohol withdrawal. The most common medications that doctors give during alcohol detox are benzodiazepines.[26]p.35

Once a person stops drinking alcohol, they are called sober. Most people need other treatments to help them stay sober.[27] [26]

Detox can be an intense process, and some people experience very strong emotions during it. This is complicated by the fact that, in the past, they may have used drugs or alcohol to help them handle strong emotions. In detox, the therapist helps them manage their emotions.[28]

Alcoholics Anonymous (AA) is the biggest support and mutual aid group for alcoholics in the world.[30] This means that in AA groups, alcoholics come together to support each other and help each other recover. AA uses a twelve-step program. This program is meant to help alcoholics fix the problems their alcoholism has caused.[31]

Groups for alcoholics and their families