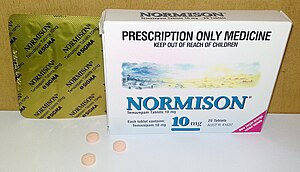 Benzodiazepines are organic chemical substances, made of two carbon rings. Certain benzodiazepines can be used as drugs that increase the effect of the neurotransmitter GABA. The resulting drug has sedative effects. Depending on the drug, the effect may be stronger or weaker. The first benzodiazepine, chlordiazepoxide (Librium), was discovered accidentally by Leo Sternbach in 1955, and made available in 1960 by the medicine company Hoffmann–La Roche.

In general taking benzodiazepines is safe and effective in the short term. Longer term use is controversial: In the long term, the drug may become less effective and problems of dependency may show.

Benzodiazepines may not be safe to be taken during pregnancy. They are not teratogens, which cause birth defects, but they may cause cleft palate in a small number of babies. Benzodiazepines can be taken in overdoses and can cause dangerous deep unconsciousness. However, they are much less toxic than the drugs they replaced, the barbiturates. Death rarely results when a benzodiazepine is the only drug taken. When combined with other central nervous system depressants such as alcohol and opiates, the potential for toxicity increases.[1] Benzodiazepines are commonly misused and taken in combination with other drugs of abuse.[2][3][4]

Benzodiazepines are used to treat[5]:

Panic Attacks: Benzodiazepines contain certain chemicals that produce a calming effect in the body. They keep the brain in a sedated state and hence help people overcome anxiety-related problems, they are also used to treat the people suffering from panic disorders.

Insomnia: Benzodiazepines are an effective treatment for severe insomnia. These drugs calm down the nerves in the brain and induce sleep.