He is said to have started western sequential art. His work ranged from realistic portraits to comic strip-like series of pictures called "modern moral subjects". His work is so well known that satirical political illustrations in this style are often referred to as "Hogarthian".[1] 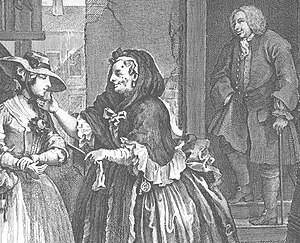 In 1731, he completed a series of moral works which made him recognised as a great and original genius. This was A Harlot's Progress. It was first done as paintings, which are now lost. Then the series was published as engravings. In the six scenes, the fate of a country girl who became a prostitute in town is traced out. At the start, the girl meets a bawd, a woman who persuades her to take up prostitution. At her shameful end, the girl dies of venereal disease and there follows a merciless funeral ceremony. The engraving show vivid scenes of drunken and loose behaviour. The series was an immediate success.

A Rake's Progress showed in eight pictures the reckless life of Tom Rakewell, the son of a rich merchant. Tom wastes all his money on luxurious living, whoring, and gambling, and dies in Bedlam. The original paintings of A Rake's Progress is displayed in the gallery room at Sir John Soane's Museum, London. 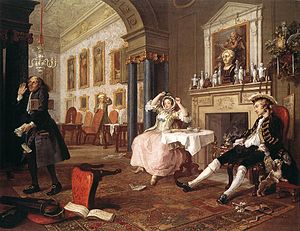 In 1743–1745 Hogarth painted the six pictures of Marriage à-la-mode (National Gallery, London), a pointed skewering of upper class 18th century society. This moralistic warning shows the miserable tragedy of an ill-considered marriage for money. This is regarded by many as his finest project and may be among his best planned story serials. Marital ethics were the topic of much debate in 18th century Britain. Marriages of convenience, and their unhappiness, came in for particular criticism.

The series shows the story of the fashionable marriage of the son of bankrupt Earl Squanderfield to the daughter of a rich but miserly city merchant. It starts with the signing of a marriage contract at the Earl's mansion and ending with the murder of the son by his wife's lover, and the suicide of the daughter after her lover is hanged at Tyburn.[2]

This shows the work ethic of Protestant England, where those who work hard get rewarded, and those who do not end badly,

Beer Street and Gin Lane (1751) was his warning on alcoholism. They were two engravings designed to be seen side by side. Hogarth engraved Beer Street to show a happy city drinking the 'good' beverage of English beer. On the other side was Gin Lane. This showed the effects of drinking gin which, as a harder liquor, caused more problems for society. People are shown as healthy, happy and prosperous in Beer Street, while in Gin Lane they are scrawny, lazy and careless.

The woman at the front of Gin Lane who lets her baby fall to its death, echoes the tale of Judith Dufour who strangled her baby so she could sell its clothes for gin money. The prints were published in support of what would become the Gin Act of 1751.

Hogarth's friend, the magistrate Henry Fielding, may have got Hogarth to help with propaganda for the Gin Act: Beer Street and Gin Lane were issued shortly after Fielding's work An Enquiry into the Causes of the Late Increase of Robbers, and Related Writings.

The Four Stages of Cruelty

The Reward of Cruelty: the last in this series

Other prints were his outcry against inhumanity in The Four Stages of Cruelty (published 21 February 1751). Hogarth depicts the cruel treatment of animals, and suggests what will happen to people who carry on in this manner. In the first picture there are scenes of torture of dogs, cats and other animals. The second shows one of the characters from the first painting, Tom Nero, has now become a coach driver, and his cruelty to his horse has caused it to break its leg. In the third painting Tom is shown as a murderer, with the woman he killed lying on the ground, while in the fourth, titled Reward of Cruelty, the murderer is shown being dissected by surgeons after his execution. The method of execution, and the dissection, reflect the 1752 Act of Parliament. This allowed the public dissection of criminals who had been executed for murder.

Hogarth wished to stop "that barbarous (mean) treatment of animals, the very sight of which renders [makes] the streets of our metropolis so distressing to every feeling mind".[3]

Humours of an Election

Canvassing for Votes, 1755. Bribes being offered and accepted

The Humours of an Election is a series of four oil paintings and later engravings by Hogarth. They show what went on in the 1754 election of a Member of Parliament. The oil paintings were created in 1755.

At this time each constituency elected two MPs, and there was a property qualification for voters, so only a minority of the male population was enfranchised. There was no secret ballot, so bribery and threats were used to raise votes.

The originals are held by Sir John Soane's Museum, London.

Hogarth was also a popular portrait painter. In 1746 he painted actor David Garrick as Richard III. He was paid £200, “which was more,” he wrote, “than any English artist ever received for a single portrait”. In the same year a sketch of Simon Fraser, 11th Lord Lovat, afterwards beheaded on Tower Hill, had an exceptional success.

Hogarth's portrait of his friend, the philanthropic Captain Coram (1740; Thomas Coram Foundation for Children, now Foundling Museum), and his unfinished oil sketch of The Shrimp Girl (National Gallery, London) are highly regarded.[1] There are also portraits of his wife and his two sisters and of many others.