Giving money to influence a person's behaviour is a form of bribery. 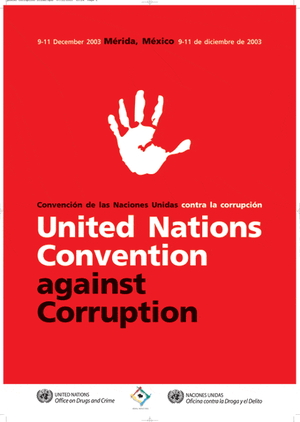 Bribery means offering something (such as money) to a person in return for some favour which is bad in some way.

It is sometimes difficult to decide whether something is a bribe or just a reward. If a father pays his son for washing the car, that is just a reward or payment. However, if a parent pays a child for eating up its dinner, that might be thought of as a bribe because most people would think that is not right.

Bribery can be a crime in more serious cases, such as when a person offers money to hide their own wrongdoing. If a motorist is caught speeding by a policeman and offers the policeman money or a bottle of vodka to persuade him not to report him, that is bribery. If someone wants to take something into a country that is forbidden (or that they would have to pay tax on), they might offer the customs officer a bribe to persuade him to let them through. Some corrupt people will not do their jobs at all (like delivering some package) unless they get a bribe on top of their normal pay.

Those examples are clearly illegal (against the law) and are rare in many countries, but bribery is quite common in business in many parts of the world. It is difficult to do anything without offering bribes in these places. Giving business people presents in the hope that they will want to do business with you may just seem like good manners at times, but in some cases, it may seem more like bribery.

People who are found to be taking bribes can sometimes lose their jobs. In some cases (like the case of the motorist), bribery is against the law.