KidzSearch Safe Wikipedia for Kids.
Jump to: navigation, search
For information about a custom or tradition, see Custom. 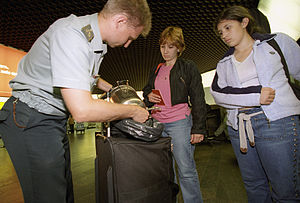 Most countries have a Customs Service. The customs service works mostly at ports, airports and the countries borders to make sure that people do not bring things into the country which are banned, or that the right amount of tax has been paid on goods that can be imported (brought into the country).

Some customs officers work at a post office. They do not meet the public, they examine letters and parcels which have been sent from outside the country, to make sure nothing illegal is being brought into the country.

In the United Kingdom the customs service was called "Customs and Excise". This is because it was once two separate bodies. The Customs service collected tax (called customs duty) on goods being brought into the country, for example brandy from France or tea from India. The Excise service collected tax (called excise duty) on goods made in the country, for example Scotch whisky or Irish whiskey. Today all cars and lorries must pay a tax to be allowed to drive on the road. Although most people call this "road tax" or "car tax", it is officially called "vehicle excise duty".