Whiskys from Scotland, the United States, and Canada 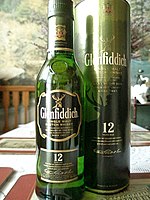 Whisky, or whiskey, is an alcoholic drink distilled from grain and aged in wooden .

The name comes from a gaelic word. In Ireland, it is called whiskey, with an added letter 'e'. Whiskey made in the United States often uses the Irish spelling.

There are many kinds of whisky, of which most important are:

Most whiskys contain around 40% alcohol.

These say that Scotch whisky must:

Alcohol is a favorite way to collect tax (called excise duty) in the United Kingdom. When Gordon Brown, a Scot, became Chancellor of the Exchequer, he concentrated on taxing beers and wines, and did not increased the duty on whisky. This, he said, was to help the Scotch whisky industry to recover, increase exports and make more money.