Script error: No such module "Distinguish". 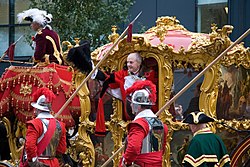 Lord Mayor of London John Stuttard during the parade on November 11th, 2006 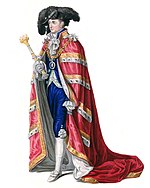 The Lord Mayor bears his mace at coronations.

The Lord Mayor is elected each year at the end of September or the beginning of October, and takes office in November. On the day after taking office, the Lord Mayor's Show is held. The Lord Mayor's role is mostly ceremonial and social, not political, although he does promote London's business credentials abroad. The Lord Mayor of London is also the chancellor of the City University of London. 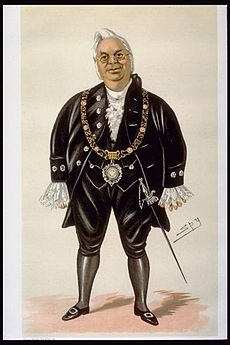 Of the 66 cities in the United Kingdom, the City of London is among the 30 that have Lord Mayors (or, in Scotland, Lord Provosts). The Lord Mayor is entitled to the style The Right Honourable; the same privilege extends only to the Lord Mayors of Bristol, York, Cardiff and Belfast, and to the Lord Provosts of Edinburgh and Glasgow. The style, however, is used when referring to the office and not to the person; "The Rt Hon The Lord Mayor of London" would be correct, while "The Rt Hon John Smith" would be incorrect.

It was once use for Lord Mayors to be created knights when they took office and baronets when they retired. The custom was applied inconsistently from the sixteenth until the nineteenth centuries; creations became more regular from 1889 onwards. From 1964 onwards, the regular creation of hereditary dignities such as baronetcies stopped, but Lord Mayors continued to be granted knighthoods (usually of the rank of Knight Grand Cross of the Order of the British Empire) until 1993. Since 1993, Lord Mayors have not received any automatic honours upon appointment.

The Lord Mayor is also