Order of the British Empire 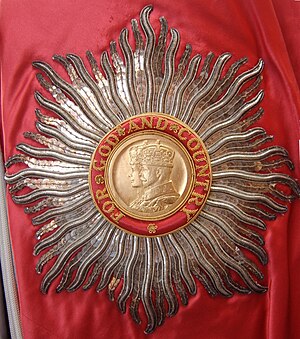 The Most Excellent Order of the British Empire is one of the British orders of chivalry. It is the newest order, created on 4 June 1917, by King George V.

The order is cut into two parts, civil and military. Both parts have five classes or ranks. In order, from highest to lowest, these are:

Only the two highest ranks are knighthoods, and allow the holder to call themselves 'Sir' (male) or 'Dame' (female). If the person is not a citizen of a country where the Queen is Head of State, the award is called honorary, and the holder cannot use the title before their name. For example Terry Wogan became a British citizen and was therefore called Sir Terry Wogan, but Bob Geldof is still an Irish citizen, and is therefore not "Sir Bob". He can, however, style himself "Bob Geldof KBE".

The British Empire Medal (BEM) was restarted in 2012, but only in the civil group. Although the BEM it is the newest British order of chivalry, it has more members than any other.

King George V wanted to be able to honour the thousands of people who helped to win the First World War, but were not soldiers.

This Order of Knighthood has a more democratic character than the exclusive Order of the Bath or Saint Michael and Saint George, and in its early days was not held in high esteem. This changed over the years.

The British monarch is Sovereign of the Order and appoints all other members of the Order but only on the advice of the Government. The next-most senior member is the Grand Master. There have been three:

The order's rules, called statutes, say that the Order can only have 100 Knights and Dames Grand Cross, 845 Knights and Dames Commander, and 8960 Commanders, but there is no limit to the number of members of the Officers and Members but no more than 858 Officers and 1464 Members may be appointed per year. Appointments are made on the advice of the governments of the United Kingdom and some Commonwealth realms.

Some jobs are usually rewarded with the Order. Usually female judges of the High Court of England and Wales are created Dames Commander after appointment. Male judges are not, because they are usually made Knights Bachelor instead.

Like the orders of chivalry, this order has six officials:

Anyone who behaves in a way that might bring the order into disrepute, may have his or her award taken away.

John Lennon once criticised military membership in the order, saying:

"Lots of people who complained about us receiving the MBE received theirs for heroism in the war - for killing people. We received ours for entertaining other people. I'd say we deserve ours more."