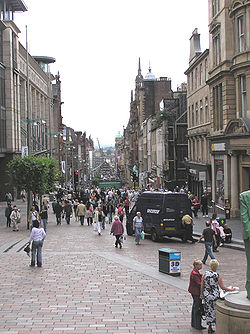 Glasgow (Scottish: Glaschu, Lowland Scots: Glesga) is the biggest and busiest city in Scotland. It is on the banks of the River Clyde. People from Glasgow are known as "Glaswegians" (glas-wee-jans), which is a name also used for words that are used only in Glasgow - also known as "The Glasgow Patter".

The number of people living inside the city proper used to be much higher. Starting in the early 1960s the old tenements were pulled down and new housing built further out (high-rise blocks were the fashion of the day). Now there is nowhere near the number of people living in Glasgow as during the famous times of the shipyards on the River Clyde. It was said to be the second biggest city in the world after London at one point in the 1800s.

Many people from other countries visit Glasgow for holidays and trips; most of these people are from Europe France, America (the US and Canada) for weekend and week trips.

Two airports serve the city, Glasgow International Airport and Prestwick Airport. The main railway stations in the city are Glasgow Central and Queen Street stations. They provide rail links to the rest of Scotland, to the rest of the United Kingdom and Europe.

There are a number of theatres and concert halls in the city. These include the SECC (Scottish Exhibition and Conference Centre), the Royal Concert hall, the King's Theatre, the Pavilion Theatre and the Theatre Royal.

Glasgow has an oceanic climate (Cfb in the Koeppen climate classification). The weather in Glasgow is almost always changing, and it is hard to say what the entire day's weather is like. Very often, the weather is worst in the morning when it is mostly damp and sometimes misty or even foggy; the Glasgow Patter also refers to dreich weather - damp and drizzly. However, the weather mostly improves through the afternoon and more often than not the weather stays dry and at an average temperature.

In summer it is popular as a base for tourists. They can stay in Glasgow and then travel to see Loch Lomond and the Western Isles. One of the oldest paddle-steamer boats is in Glasgow, and in the summer one can travel down the Clyde to visit other towns and islands.