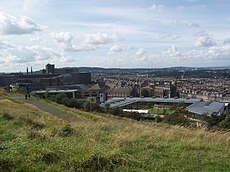 A view of the city from Calton Hill 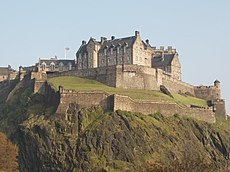 Edinburgh (Scottish Gaelic: Dùn Èideann) is the capital city and second largest city in Scotland. Edinburgh lies on the east coast, where the River Forth flows into the sea.

The central part is Edinburgh Castle, at the top of a steep hill. The castle has a military display every year, called a tattoo, where soldiers show their skills at marching and competitions, and there are brass bands and bands of bagpipes.

Edinburgh has a very large festival every year, where thousands of performers come to put on shows. The Edinburgh International Festival takes place in August and September. At the same time there is the Edinburgh Fringe. The shows are of all kinds, and range from large ones with famous people, to very small ones by new or unknown actors.

The city is served by Edinburgh Airport, and Haymarket and Waverley railway stations.

The Old Town of Edinburgh is the oldest part of the city, and with the 18th-century New Town, it is a UNESCO World Heritage Site. It has preserved its mediaeval plan and many Reformation-era buildings.

The city's main football teams are Heart of Midlothian F.C. and Hibernian F.C. Murrayfield stadium in the city is the home of the Scottish national rugby team. The nearby Murrayfield Ice Rink is home to the city's ice hockey team, the Edinburgh Capitals. See also Leith Athletic F.C.

Edinburgh is twinned with:

Edinburgh has lots of important buildings. The Balmoral Hotel was opened in 1902 and designed by W. Hamilton Beattie. Saint Giles' Cathedral was built in Mediaeval times. There was a big fire there in 1385. The Royal Museum was designed by architect Francis Fowke and built between 1861 and 1888. Its sister museum, the Museum of Scotland, was designed by Benson and Forsyth in 1998. Holyrood Palace was once the home of the Scottish kings, and is open to the public.

Alexander Graham Bell, who invented the telephone, was born in Edinburgh.[1]