The Golden Temple in Kyoto. 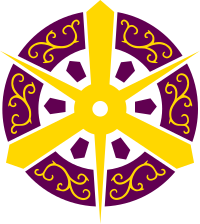 Kyoto is a major city in the Kansai region of Japan. Its population is 1.5 million people. The city of Kyoto is the capital city of the prefecture of Kyoto. Kyoto is one of the cultural, educational, and technology centers of Japan. In it are many universities including Kyoto University, the second oldest national university of Japan.

After 794, the Japanese emperors lived in this city which was called Heian-kyō.[2]

In 1868, the city was called Saikyō ("Western capital") in order to distinguish it from Edo (Tokyo) which was the "Eastern capital".[3]

There are mountains around the city on the east, north, and west sides. Some people in Kyoto believe that these mountains make Kyoto's summer especially hot and humid, and Kyoto's winter very cold.

We can see many temples and shrines built in traditional Japanese architectural styles here. Some of those buildings are registered as UNESCO World Heritage Sites. On the other hand, since Kyoto was one of biggest and richest Japanese cities in the middle of the 19th century; the citizens were eager to import European style, and there are many European style buildings in the center of Kyoto for company offices and schools.

Kyoto is one of oldest cities in Japan. Many tourists from all over the world come to Kyoto. Japanese people often come to Kyoto in the spring to see the cherry blossoms, and in the autumn to see the leaves change color.

The oldest novel in the world, Shikibu Murasaki's The Tale of Genji is set in Kyoto during the Heian Period.

Help Improve This Page: Please contact us to become an approved KidzSearch editor and provide your credentials. Provide feedback on this article in our Kyoto Forum