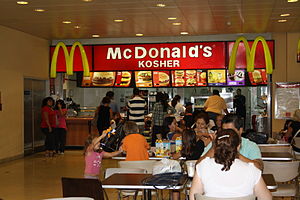 McDonald's is an American corporation[3] that operates one of the largest chains of fast food restaurants in the world.[4]

McDonald's has over 36,000 stores in 119 countries and territories, the second-most stores out of all fast food chains worldwide behind only the submarine sandwich chain Subway.[5] They serve almost 54 million people each day.[6]

The first McDonald's restaurant was opened by Richard and Maurice (Mac) McDonald in 1940. It was located on Route 66 in San Bernardino, California.[7] The McDonald brothers later sold their company to Ray Kroc in Des Plaines, Illinois.

In Australia, they sell the Frozen Coke,[8] which is very popular.

More McDonald's food is sold in the United States than in any other area, which means that it is McDonald's largest market. Europe is McDonald's second largest market.[9] The restaurants are either operated directly by McDonalds or more often by a franchisee,[10] where the business is owned and operated by someone else to the standards set by McDonald's and with support from the McDonald's company. The company provides a central source of supply for food items and standardized menu.[7]

McDonald's used to make their fries in beef tallow. People liked the flavor the tallow gave to the fries. Criticisms about its high saturated fat content have came up in late 80s. In 1990, McDonald's switched to using vegetable oil.[11]

In 2014, McDonald's in Europe used chicken meat which was produced by using genetically modified animal feed, which it had not done since 2001. Greenpeace states that McDonald's saves less than one Eurocent for each Chickenburger and goes down a path not desired by its customers.[12]

The McDonald's mascot is Ronald McDonald.

McDonald's has restaurants in the following countries: